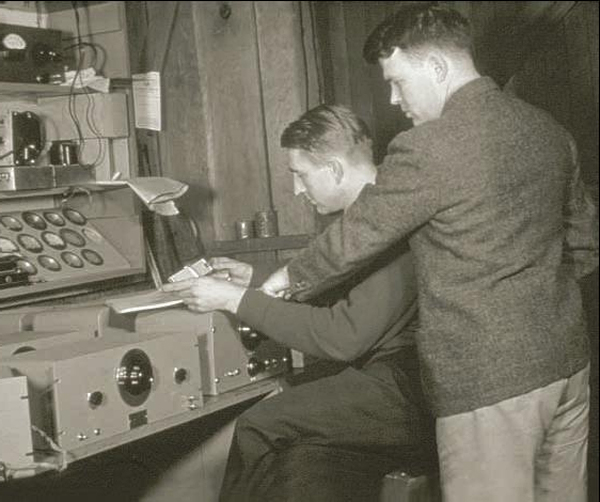 Today would be the 99th birthday of American electrical engineer and Hewlett-Packard co-founder William (Bill) Hewlett (right, with Dave Packard left, above).

In 1939, Hewlett completed his EE masters thesis at Stanford. His thesis project was a variation of the Wien bridge oscillator, in which he used the negative resistance of an incandescent lamp to act as a parasitic impedance in the feedback loop. This ensured that the oscillator operated just at unity gain, and thus produced steady, low-distortion output.

This was a really clever and elegant hack — many oscillators of the time did not produce steady oscillations, but instead fed a pulse stream (sometimes just a rectified mains signal) to an RLC tank circuit with a large Q — so the output was a series of decaying oscillation patterns with modulation at this pulse frequency. Oscillators which did produce steady output were large and expensive. Hewlett replaced the complex control systems of these with a simple light bulb.

HP’s first product, the HP200A bench oscillator (on the left, above), was based on Hewlett’s thesis design, optimized for manufacturing in the now famous garage in Silicon Valley.

Hewlett attended classes taught by Fred Terman at Stanford and became acquainted with David Packard during his undergraduate work at Stanford. He and Packard began discussing forming a company in August 1937, and founded Hewlett-Packard Company as a partnership on January 1, 1939. A flip of a coin decided the ordering of their names.[3] The company incorporated in 1947 and tendered an initial public offering in 1957.[1] Hewlett was president of the Institute of Radio Engineers in 1954.[4] Also in 1939 he married Flora Lamson, and the couple eventually had five children: Eleanor, Walter, James, William and Mary. There are 12 grandchildren.

A young Steve Jobs, then in grade eight, had called up Hewlett requesting a part for a frequency counter that he was building. Hewlett was impressed with Jobs’ gumption and offered him a summer job. Jobs then considered HP one of the companies that he admired, regarding it among the handful of companies (Disney and Intel were the others) that were built “to last, not just to make money”.

Bill was the very definition of a Maker, and a great example of where tinkering in the garage can get you. I think it’s very fitting that this year’s Bay Area MakerFaire coincides with what would have been his 99th birthday. Happy Birthday, Bill!