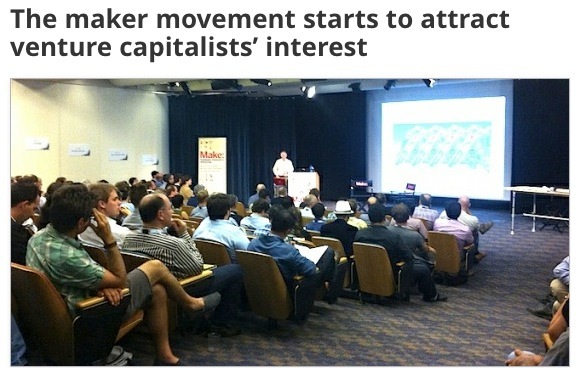 Every year, my family looks forward to Maker Faire, a family-friendly celebration of DIY mayhem, with eager anticipation. But when venture capitalists get involved in the maker movement, you know something new is afoot.

One such VC is Brad Feld, who showed up last week at a “Hardware Innovation Workshop” hosted by Maker Faire organizer O’Reilly Media at Xerox PARC, the storied home of many magical inventions.
The “maker” movement owes much to O’Reilly’s Make magazine, which is like Popular Mechanics for a new generation of Arduino-enabled, LED-lit, UAV-launching DIY types. It’s a monthly magazine packed with hobbyist projects: Everything from making your own homemade cigar box guitar to building a laser CNC router for fabricating stuff. With last week’s day-long workshop, O’Reilly was making the case (pardon the pun) that making can be a business, too.

It was a small but focused gathering of about 150 people, some of whom had come from thousands of miles away. Makers, product designers, artists, entrepreneurs, manufacturers, and venture capitalists talked about bridging the gap between home hardware hacking and building a real hardware business.

“We don’t give a shit about hardware, and we don’t do hardware investments,” said Feld, whoseFoundry Group has invested in several hardware companies, including MakerBot Industries, Spheero, and Fitbit. “What we love is software wrapped in plastic.”