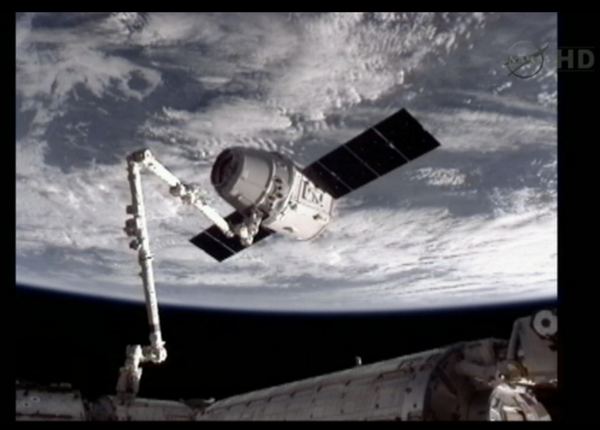 Less than an hour ago, the SpaceX Dragon spacecraft was captured by the ISS robotic arm, in preparation for a first-of-its-kind docking maneuver. Upon completion, Dragon will be the first private spacecraft to dock at the ISS.

“Looks like we caught a Dragon by the tail !” said a gleeful Astronuat Don Pettit who plucked the Dragon from space with the robotic arm as it was in free drift about 10 meters from the station.

The Dragon cargo capsule is a commercial spacecraft designed and developed by SpaceX and was launched atop a Falcon 9 booster from Cape Canaveral, Florida on a historic test flight on May 22 to become the first private vehicle ever to rendezvous and dock at the million pound orbiting space complex.

Following a successful series of close approach rendezvous tests on Thursday, May 24, when it flew to the ISS from behind and below during fly-under maneuvers to within 2.4 km (1.6 mi), the commercial cargo carrier was cleared for final rendezvous, grappling and docking today.