How Kinect Spawned a Commercial Ecosystem 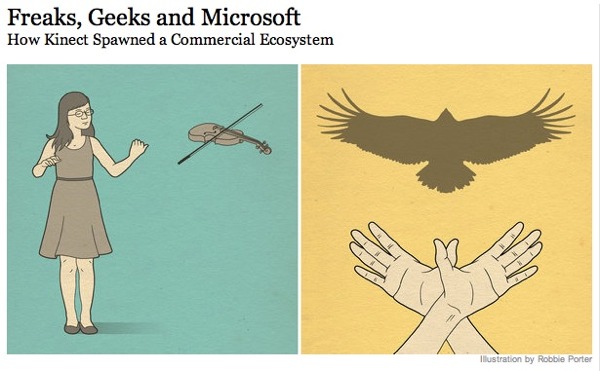 To use a Kinect with a computer instead of an Xbox, Watson needed a “driver” (basically a bit of software) that did not exist. He joined a small, far-flung, highly dedicated and technically sophisticated community effort dubbed OpenKinect, which sprang up immediately after the Kinect was introduced, to write the code that would make this possible. At the same time, Adafruit, a hobbyist-focused electronics company based in New York, offered $1,000 to the first person or group to write the necessary code in an open-source format.

At the time — this was shortly before the 2010 holiday season — Microsoft’s primary Kinect focus was the mainstream game-playing market. Its first response to OpenKinect seemed predictable: CNET reported an unnamed spokesperson declaring that the company “does not condone the modification of its products” and would “work closely with law enforcement . . . to keep Kinect tamper-resistant.” Adafruit increased its prize, ultimately to $3,000. Within days a developer in Spain posted videos demonstrating that he made his Kinect work with a P.C. OpenKinect refined and spread the open-source driver code, and a variety of “Kinect hacks,” as they came to be called, proliferated in YouTube videos. (An early example involved a Kinect used to create a version of the hand-swipe control contraption Tom Cruise used in “Minority Report.”) Soon Watson and his wife, Emily Gobeille, posted their own video, in which her hand movements were captured by a Kinect and translated onto a screen displaying a computer-generated bird figure, which she controlled like a high-tech puppet.

Long story about the conflict and tension at Microsoft with the Kinect hacking… One note, we published the USB dump (and example) to get folks started on the open-source driver in addition to the bounty project with Johnny Lee.

Comments Off on How Kinect Spawned a Commercial Ecosystem