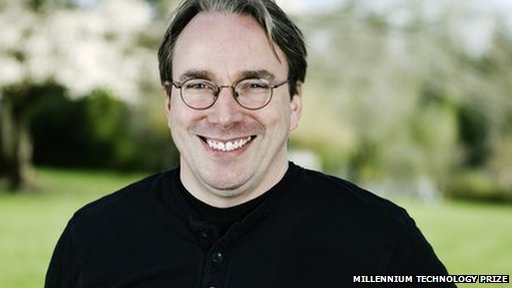 In my morning news feed, I came across this great BBC interview with Linus Torvalds. One of my favorite things about Torvalds has always been his ability to grasp and succinctly explain technology in a wider social context. When asked here for his feelings on the Raspberry Pi, he does not disappoint:

The recent launch of the Raspberry Pi, running on Linux, has attracted a lot of attention. Are you hopeful it will inspire another generation of programmers who can contribute to the Linux kernel?

So I personally come from a “tinkering with computers” background, and yes, as a result I find things like Raspberry Pi to be an important thing: trying to make it possible for a wider group of people to tinker with computers and just playing around.

And making the computers cheap enough that you really can not only afford the hardware at a big scale, but perhaps more important, also “afford failure”.

By that I mean that I suspect a lot of them will go to kids who play with them a bit, but then decide that they just can’t care.

But that’s OK. If it’s cheap enough, you can afford to have a lot of “don’t cares” if then every once in a while you end up triggering even a fairly rare “do care” case.

So I actually think that if you make these kinds of platforms cheap enough – really “throw-away cheap” in a sense – the fact that you can be wasteful can be a good thing, if it means that you will reach a few kids you wouldn’t otherwise have reached.