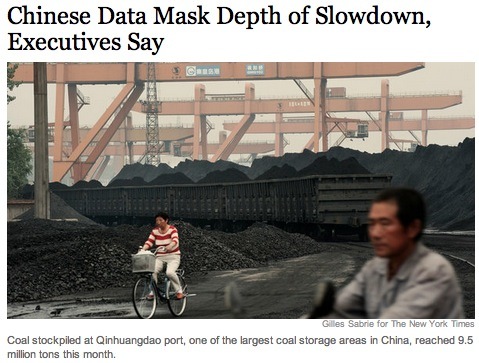 As the Chinese economy continues to sputter, prominent corporate executives in China and Western economists say there is evidence that local and provincial officials are falsifying economic statistics to disguise the true depth of the troubles.

Record-setting mountains of excess coal have accumulated at the country’s biggest storage areas because power plants are burning less coal in the face of tumbling electricity demand. But local and provincial government officials have forced plant managers not to report to Beijing the full extent of the slowdown, power sector executives said.

Electricity production and consumption have been considered a telltale sign of a wide variety of economic activity. They are widely viewed by foreign investors and even some Chinese officials as the gold standard for measuring what is really happening in the country’s economy, because the gathering and reporting of data in China is not considered as reliable as it is in many countries.

Interesting that how much coal is used (or not used) is the measurement.

Comments Off on Economic activity – measured by coal