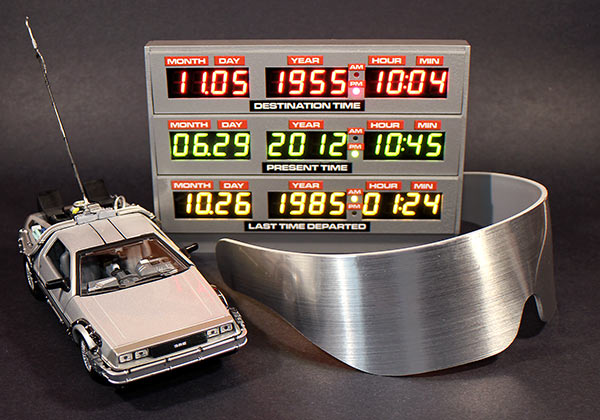 Getting the big question right out of the way: no, we won’t be selling these. Legally, we can’t, for trademark reasons. But it’s generally okay for anyone to create replica props for their own personal use, so we hope this writeup will inspire some cool projects among our readers… 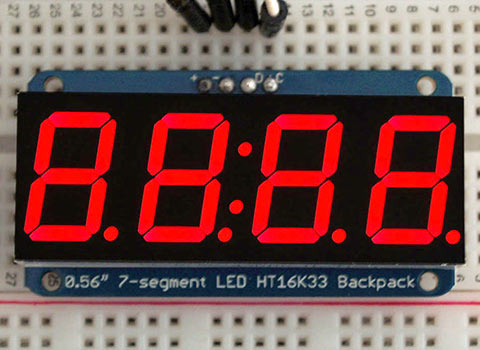 From the moment these LED displays made an appearance on our weekly Ask an Engineer show, comparisons were being made to the DeLorean time circuit from the Back to the Future films. It was a moral imperative then to make a demo! If you’re handy with Arduino and some shop tools, you should be able to pull off something similar (better, even), or adapt the ideas to other projects. This was quickly built in fun, so please don’t expect the same level of polish as a finished product tutorial.

When accepting this assignment, I might’ve failed to mention a small detail: I don’t own a car, let alone a DeLorean, for displaying the finished prop. Instead, mostly inspired by Jeri Ellsworth’s NES purse, I had this goofball idea of a slim, battery-powered device that could be placed in ironic settings: on a bicycle, on public transit, hung from a Flavor Flav necklace, and so forth.

While the general idea could have been accomplished quickly and easily with an iPad running the Flux Capacitor™ app, I wanted to preserve somewhat the staggered design of the original, and it had to have real 7-segment LED displays…there’s no substitute for seeing the genuine thing. In much the way that nixie tubes have a certain vintage coolness about them, LED displays too are reaching a nostalgic threshold, iconic of 1980s technology. 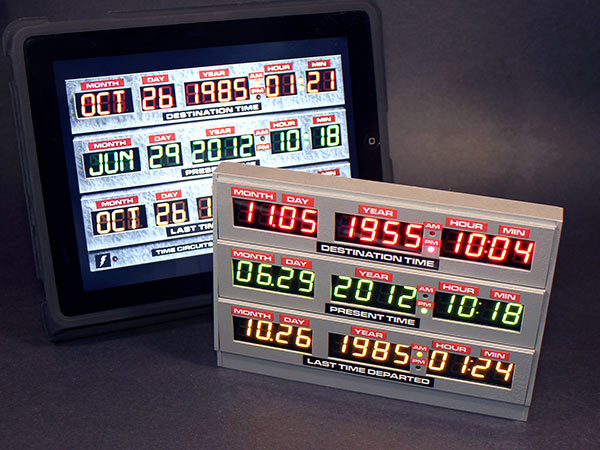 Using stock parts required some design compromises. The date and time formats would be changed to fit these 4-digit displays (the film prop used back-painted glass fakes for the month display, with some segment changes being physically impossible, making a 100% match unattainable anyway…iPad wins there). Also took liberties with some LED colors and various spacings, but overall the piece is still highly recognizable.

For the sake of a quick demo, I had to cut this short. Though all the displays are addressable, the destination and last-departed dates are simply fixed values from the first film; there’s no interaction. I may revisit this to add a keypad later, but for now it’s all just a fancy clock (it does show the current time accurately, using a ChronoDot RTC). Also, the vector files are not available, because they’re utter garbage! Creating something of finished kit quality requires many iterations and refinements…but with a rushed, one-shot piece like this, course corrections would come in the form of a Dremel tool and epoxy putty. If you plan to build one, give it some time and prepare your blueprint carefully. 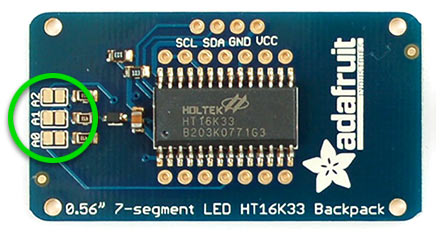 These 4-digit displays can be assigned one of eight fixed I2C addresses via solder jumpers on the back. But the time circuit needs nine displays. A few possibilities were considered, including driving the one extra display “manually” with shift registers, or use a software I2C library and split the displays among multiple I2C buses. Either would require lots of library code changes and some intense concentration, but I was hit with a massive sinus headache at the time and really didn’t want to think about it.

Instead, exploiting the fact that we need just one way, write-only access to use the displays, I used a simple hardware hack to split the I2C bus to communicate with one row of three displays at a time (saving some code by repeating the same addresses in each row). The I2C data line fans out to all the displays as normal, but the clock feeds the enable lines of a 74HC138 3-to-8 line decoder, and the microcontroller can then select which output line forwards the clock signal. The data on the other I2C buses is ignored without the corresponding clock.

To keep this ultra slim, a Teensy microcontroller board was used — a standard Arduino wouldn’t fit, not even the headerless Leonardo. After prototyping the full circuit on a breadboard, all the parts were soldered point-to-point and “dead bug” style inside the case. Power is provided by three AA cells in series — a bit under the ideal 5 Volts, but still sufficient to run everything. The cells fit in the “chin” below the three dates. I’d mail-ordered a special battery holder for this, and then in my rush to complete the project I went ahead and made all the case parts based on the holder dimensions on a web site. Naturally then, with the case already cut and glued, the part that arrived was slightly larger than the dimensions posted. The fix was to break off the battery contacts from the ends of the holder and epoxy putty them directly into the case. This eliminated just enough girth for everything to fit. The remaining electronics were delicately folded into the case with copious amounts of hot-melt glue, tape and swearing. 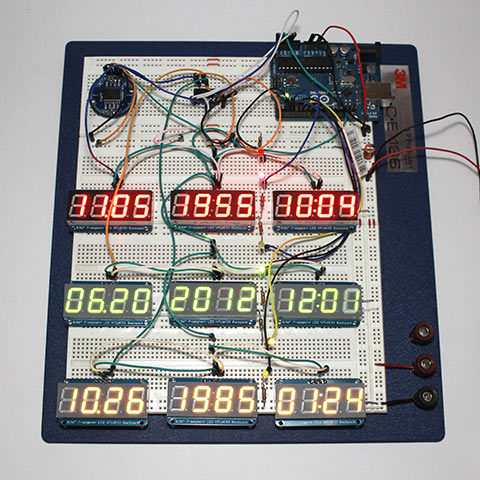 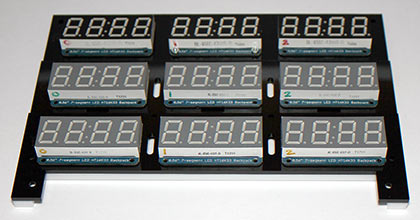 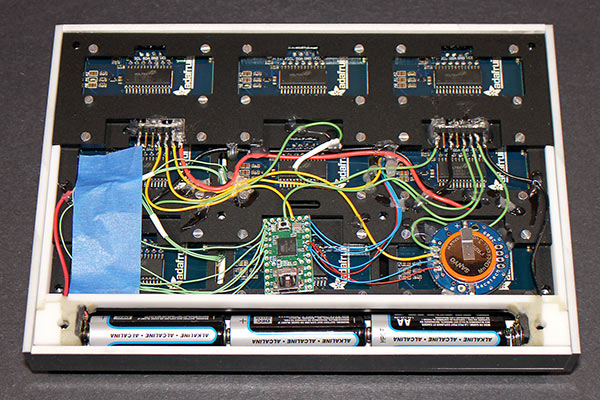 The case was fabricated from laser-cut acrylic and sprayed with faux hammered metal paint. A metal enclosure would have been more authentic (and more work), but a corollary to “Maslow’s hammer” dictates that when you have a laser cutter, every project appears ideally suited to acrylic. The labels were inkjet printed and made into stickers with a Xyron applicator, trimmed with an X-Acto knife, then painstakingly touched up with a Sharpie marker to hide the white edges. After the labels were applied, the bezels received a thick spray of acrylic sealer, then attached to the front of the case with epoxy. 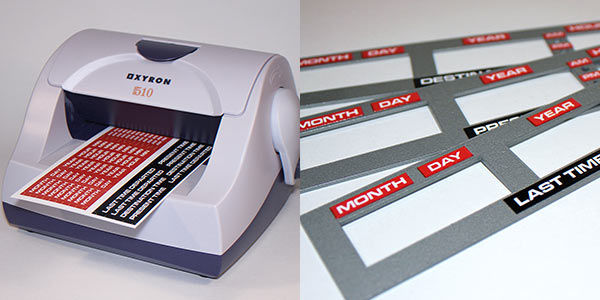 Go for it! If you don’t own a DeLorean, this will still impress your co-workers and look great on your desk. Or maybe you can devise a scheme around Halloween or a geek-fest like Dragon*Con. Bolt it just below the arc reactor on your Iron Man suit (you do have an Iron Man suit, right?). Or if you have a young son in a stroller, attach the time circuit to the tray, dress junior in mirrored shades and a down vest, while dad dons a Doc Brown getup. Instant father-son cloying adorableness! 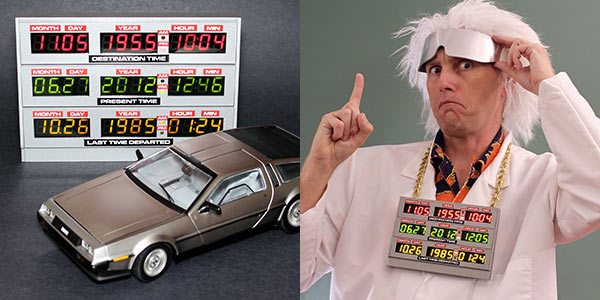 Even if you don’t build this exact item, if it inspires any nifty electronics projects (*cough*Proton Pack*cough*), please share them in the forums, bring them to the Saturday night show-and-tell or document your build on a site like Instructables. Customer projects are frequently showcased on the Adafruit blog!

Here’s the Arduino sketch that runs the show.

Parts from the Adafruit store include:

Additional parts acquired from Digi-Key include: