Scientists Believe They Have Discovered the Higgs Boson! 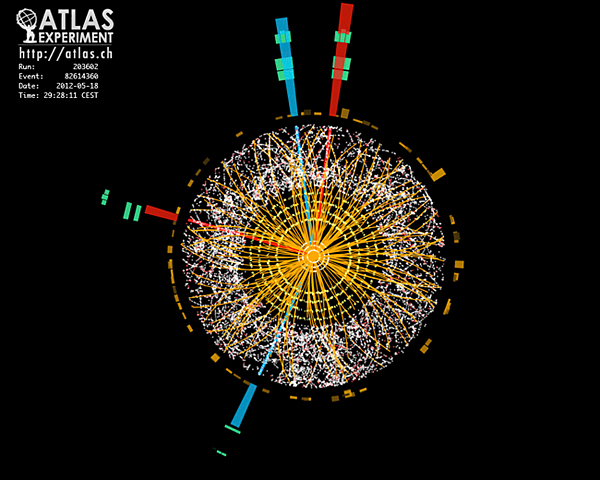 Whoa! Scientists at CERN announced early this morning that they are very confident they have found the Higgs boson. From New Scientist:

There’s a 5-in-10 million chance that this is a fluke. That was enough for physicists to declare that the Higgs boson – the world’s most-wanted particle – has been discovered. Rapturous applause, whistles and cheers filled the auditorium at CERN, near Geneva, Switzerland.

Almost 50 years after its existence was first predicted, the breakthrough means that the standard model of particle physics, which explains all known particles and the forces that act upon them, is now complete.

A Higgs boson with a mass of around 125 to 126 gigaelectronvolts (GeV) was seen separately by the twin CMS and ATLAS detectors at the Large Hadron Collider, each with a confidence level of 5 sigma, or standard deviations, the heads of the experiments announced today at CERN.

Even by particle physicists’ strict standards, that’s statistically significant enough to count as a particle discovery.

“I think we have it,” said Rolf Heuer, director general of CERN, as he concluded a hotly-anticipated seminar, which began today at 9am local time.

More from the New York Times:

Confirmation of the Higgs boson or something very like it would constitute a rendezvous with destiny for a generation of physicists who have believed in the boson for half a century without ever seeing it. And it reaffirms a grand view of a universe ruled by simple and elegant and symmetrical laws, but in which everything interesting in it, such as ourselves, is due to flaws or breaks in that symmetry.

According to the Standard Model, which has ruled physics for 40 years now, the Higgs boson is the only visible and particular manifestation of an invisible force field, a cosmic molasses that permeates space and imbues elementary particles that would otherwise be massless with mass. Particles wading through it would gain heft.

Without this Higgs field, as it is known, or something like it, physicists say all the elementary forms of matter would zoom around at the speed of light, flowing through our hands like moonlight. There would be neither atoms nor life.

You can read more at the ATLAS and CMS websites.