The Cameras of Curiosity 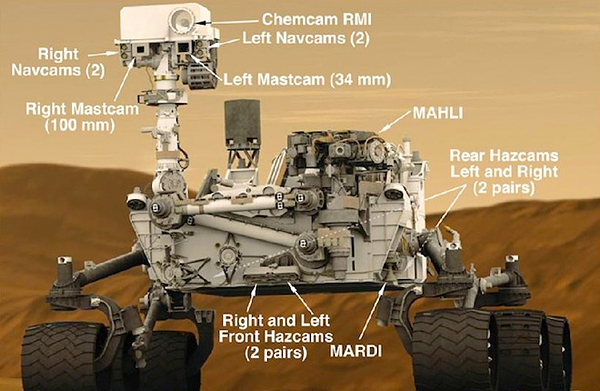 A very nice writeup over at Wired about the 17 cameras aboard the Curiosity rover:

One of the best parts of having NASA’s Curiosity rover on Mars is the incredible images that it’s going to start beaming back to viewers on Earth.

After the probe’s safe landing, it sent several pictures of its wheels on the ground to mission control to let engineers know that everything was okay. But these dusty, close-up images cannot compare to the snapshots that the rover will soon be taking.

Curiosity is packed with no fewer than 17 cameras to shoot high-quality photos and videos in black-and-white, color, and 3-D stereo of the Martian landscape. While scientists are no doubt quite eager for the information that these images will contain, most of us will be excited to live vicariously through the rover and experience some breathtaking views on Mars.

None of the cameras has more than 2-megapixels of resolution, which at first seems surprising, but I think there are a few good reasons for it:

Lower resolution means smaller images. The bandwidth of the radios on Curiosity is limited to about 10-15Mbps (it tops out at 40, but it changes depending on position, and is shared with other streaming data), so larger images would take a much longer time to upload back to Earth. Anybody who remembers browsing the web with a 14.4k modem can relate.

Lower resolution also means lower noise and lower power. For a given sensor size, a lower-density sensor will have better noise performance than a higher-density design, assuming signal processing and fabrication tech are the same. It also means less physical gates on the chip, which reduces power consumption (and heat).

Finally, it’s important to remember that the cameras are mounted on a robotically controlled, motion-indexed platform, so taking adjacent, grid-aligned pictures that can be stitched together later is pretty easy.

Of all the cameras on Curiosity, I’d have to say the MAHLI is probably my favorite — it’s basically designed to act like a hand-held magnifying glass (if your hand is a giant robotic turret, anyway), taking macro photos of rocks and dirt. This allows geologists to note features like twinning, which can give clues about the origins of these samples.

UPDATE: There’s some more camera info, as well as a lot of other stuff about the “skycrane” procedure in this awesome article from Ars Technica.

Filed under: photos, science — by johngineer

Comments Off on The Cameras of Curiosity