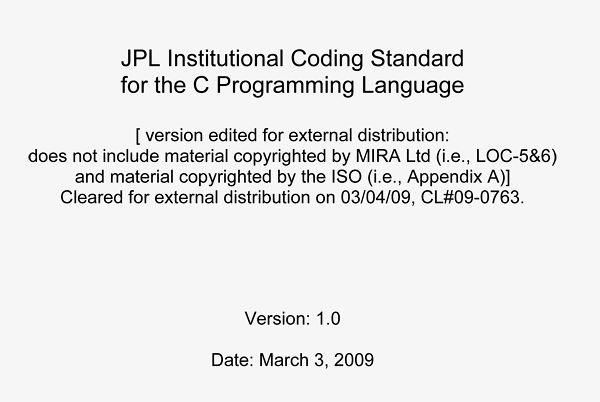 How do the folks at JPL write the code that will land a 2000-pound robot on Mars without a single glitch? Much of their success is no doubt due to their talent and dedication, but it doesn’t hurt that they have very strict coding standards (PDF). Among the requirements for C-language code at JPL:

The JPL code standards are based on the 2004 MISRA-C coding standard. MISRA was originally designed for automotive applications, but was later adapted to other safety-critical systems where computer glitches can have dire consequences, like remote control locomotives. Some of the requirements parallel specifications of the language ADA, which was originally designed for safety-critical applications like missile guidance systems.

The 2009 version of the standard is available as a PDF from jpl.nasa.gov.