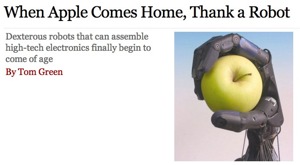 When Apple comes home—and it will happen sooner than anyone, even Apple, would ever imagine—we’ll need to thank the triumvirate of rising wages overseas, automation and robots, especially robots.

Rising wages and automation alone might make Apple move to India or Africa, but not re-shore itself stateside. The robot, however, holds the automation key.
It takes five days and 325 steps to assemble an IPad

The 325 steps and five assembly days needed to bring an iPad to life are in the hands of 300,000 Chinese workers at Foxconn’s Longhua factory. It’s those 300,000 pairs of assembly hands that robots will replace.

Jamie Wang, a Taipei-based analyst for the research firm Gartner, sees lots of human hands going over to robots. A robot can be operated non-stop 160 hours a week, which would easily replace two to four workers. Such highly structured and predictable tasks are well suited to automation, he says.   However, Wang stresses that such automation requires lots of infrastructure work just to get ready to install the robots. For Foxconn, it’ll be awhile, even if Terry Guo, chairman of Taiwan’s Hon Hai, still believes that his firm’s Foxconn division will soon have a million robots ready to take over. In fact, Gou may be waiting for a very long time for reasons that have nothing to do with technology.

Comments Off on Thank a Robot