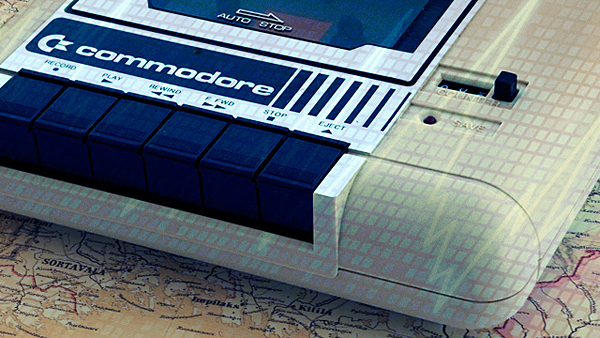 Check out this great article in Ars about a Finnish radio station that experimented with sending BASIC cassette programs over radio in the 80’s:

With his VIC-20, Tunkelo taught himself BASIC, then studied assembly language. He wrote programs that ran “straight to the metal,” as he put it, but also came from the heart. One included graphics that celebrated his sister’s high school graduation. But the young innovator felt isolated. “Computers were not as popular as they are now,” Tunkelo said, and few schools had one.

Then came a remarkable radio show that changed the landscape for him and a generation of Finnish technology lovers—a show that literally broadcast code over the airwaves.

“If you wrote a piece of code in a computer, saved it on a [Commodore] C-cassette, took that cassette out and listened to it with an ordinary cassette recorder you heard sounds,” Lehtonen explained. “But as sounds could be copied to another tape and as sounds could be transmitted over radio, then why should it not be possible to receive even these sounds of the code, record them with a C-cassette recorder and have the recorded sounds do their trick in another computer?” In other words—why couldn’t you distribute code by simply playing it over the radio while enthusiasts taped it for later use?

And finally, this charming quote:

Some listeners cared nothing for the code—they simply enjoyed the sound of the buzz. “I once had a letter from a 70 year old lady who wrote she did not understand anything of computing but she liked to listen to how different makes of computers buzzed in their personal (!) ways,” Lehtonen recalled.