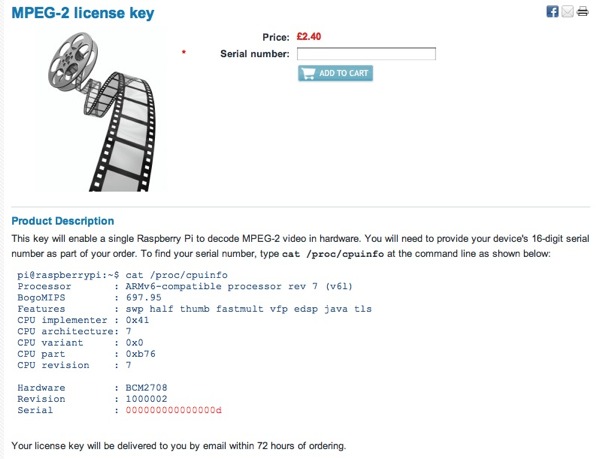 Thing is, a bunch of you went and bought the Raspberry Pi in February and immediately started using it as your primary media centre. And many, many of you have existing media libraries which are encoded using MPEG-2, and don’t fancy transcoding gigabites of stuff to H.264. You’ve been complaining about that. Vociferously.

We’ve spent some months working out how on earth to square this particular circle. A blanket licence for everybody would cost the Foundation money it simply doesn’t have, and not everybody with a Raspberry Pi would use that licence; an individual licence for an individual user to download and use with an individual machine is a surprisingly finickity thing to engineer. (This is why we’re very grateful to have Dom on board our engineering team, because he’s clever.) But that’s what we’ve done – so from today, you’ll be able to purchase an MPEG-2 decode licence which will be tied to your Raspberry Pi’s unique serial number. This will allow you to play MPEG-2 material from XBMC and omxplayer, which hasn’t been an available feature before now.

To purchase an MPEG-2 licence visit our (relaunched) store. And before you mention it in the comments, yes, stickers, t-shirts and other merchandise will be available, but not until we’ve built up a staff to handle it, which will take up a few months. Eben and I quickly realised earlier this year that if we keep gumming the envelopes and sticking on labels for this stuff ourselves, we will die from papercuts and boredom in very short order – and nothing else will get done because we’ll be very gluey.

We have also made a VC-1 licence available for purchase in the store. This is Microsoft’s video codec, and we don’t expect as many of you to require it as require MPEG-2, but there is a significant volume of material out there in this format which we thought it’d be nice to have the option to view on the Raspberry Pi.

Read more, this is very cool.