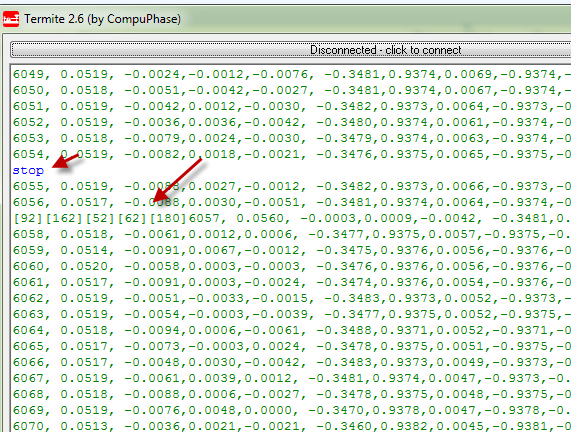 The Starlino blog has a detailed tutorial on USB firmware debugging.

Ah, the joy of firmware debugging! I’ve been working on a USB firmware for my new upcoming product that involves a dual traditional TTL (Serial) and a USB-TO-SERIAL converter (CDC Communication Port) implemented in the same firmware. The firmware was written in C18 , using the USB stack from Microchip Applications Libraries.

Everything worked well until I suddenly discovered that while sending data over the CDC port from the computer to the device, the device would *sometimes* receive garbage data instead of what I sent. This wouldn’t be so discouraging if the data received would be the same, or at least this would happen always not *sometimes*.  The bug was caught in the act on the screenshot below, the arrows show the data I actually sent ‘stop’ followed by LF (0xA) char and the character codes (in decimal) actually received. This is garbage because 92,162,62,180 are note the ASCII chars for ‘stop’.  Please note that this will only occur *sometimes*, however I could almost consistently repeat it after several retries of sending a command to the device.

The tracking of this bug turned out to be so adventurous and involved that I decided to write a tutorial about it. It involved some tools that I didn’t use often before, but now they proved indispensable in locating this furry and fuzzy code pest . As you’ll see at the end of the article the bug was pretty obvious at least for me (I already made this mistake many times , but forgot about it), however it might be really useful for someone just starting working with microcontrollers,  C and/or  interrupts. It also provides an opportunity to review some tools I used in the process.

Check it out here.

Filed under: random — by Tyler Cooper