An edge-lit acrylic zoetrope based on the linux game Word War VI. The game was written by Steve Cameron, a fellow member of hackerspace TX/RX Labs. I was looking to do a zoetrope project and his vector based game was perfect for a straight forward laser etched animation.

The display is a series of 12 frames on a spinning acrylic disk with a ring of LEDs around the edge that are flashed every 1/12th of a revolution to make the animation appear. A stepper motor directly drives the disk which is being controlled by an Adafruit motor shield on an Arduino UNO. The LEDs are switched by one of the extra h bridges on the motor shield. All the timing is done open loop with the Arduino just counting nanoseconds between when to flash and when to step the motor. 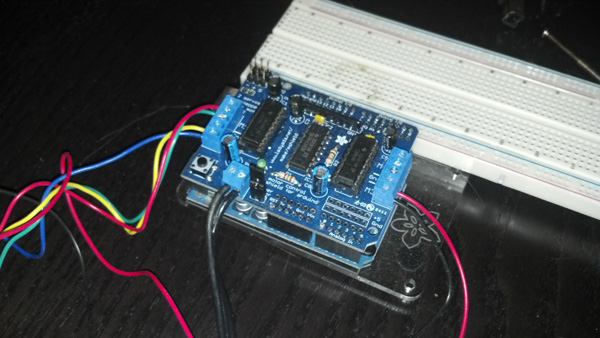 Arduino is a great starting point for electronics, and with a motor shield it can also be a nice tidy platform for robotics and mechatronics. Here is a design for a full-featured motor shield that will be able to power many simple to medium-complexity projects.

In Stock and Shipping Now