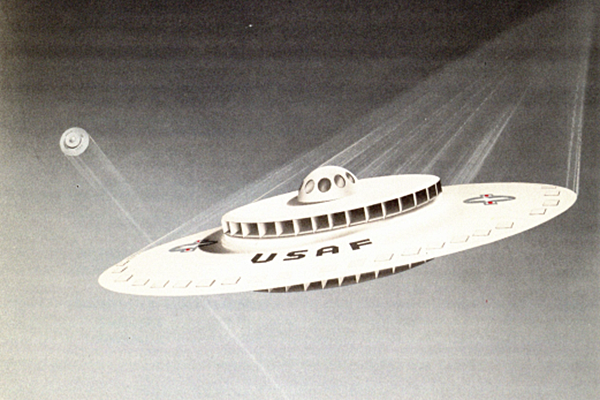 Though I’m a huge X-Files fan, I’ve never gone in for some of the more esoteric UFO theories. But one thing I do love is solving engineering problems, and the problems posed by a flying saucer-shaped aircraft are real humdingers. Boundary conditions of stability and structural integrity are imposed by designs with a specified physical envelope and performance goals. So I’m really digging this article from Wired about US Air Force Project 1794, in which the problem of how to build a flying saucer was actually explored. From Wired:

Officially, aliens have never existed but flying saucers very nearly did. The National Archives has recently published never-before-seen schematics and details of a 1950s military venture, called Project 1794, which aimed to build a supersonic flying saucer.

The newly declassified materials show the U.S. Air Force had a contract with a now-defunct Canadian company to build an aircraft unlike anything seen before. Project 1794 got as far as the initial rounds of product development and into prototype design. In a memo dating from 1956 the results from pre-prototype testing are summarized and reveal exactly what the developers had hoped to create.

The saucer was supposed to reach a top speed of “between Mach 3 and Mach 4, a ceiling of over 100,000 ft. and a maximum range with allowances of about 1,000 nautical miles,” according to the document.

Check out the National Archives blog post about it too.