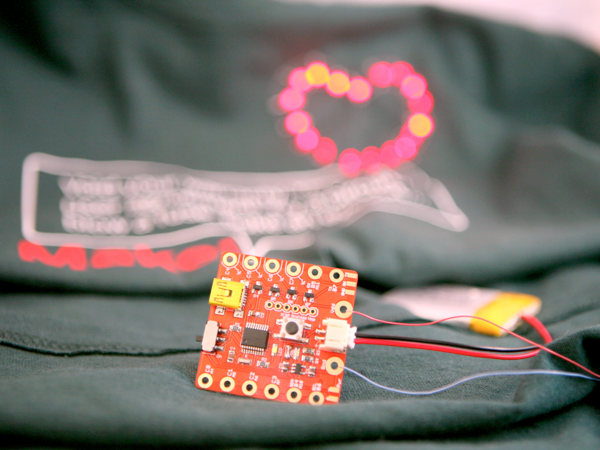 Ray showed us his project SquareWear on the Show and Tell!

Last year I helped my school with several wearable electronics workshops. They were great success: the students had a lot of fun sewing LEDs and sensors onto clothes, and many women students came to attend the events. We used Lilypad Arduino, which is a popular microcontroller board designed for wearable computing projects. It’s a very nice design, but using it for a 40-student workshop presented a few challenges. First is the cost. Lilypad itself costs about $20, which is ok. But to program it, you need to get an external FTDI cable, which costs another $15. We want students to take the gadgets with them after each workshop. But since we had a small budget, we couldn’t afford to buy one set for each student. So we had to let every 2 students share a set. Not everyone was happy about it. Second is FTDI driver issues. You would think this is easy, but it turned out that at the beginning of each workshop, we had to spend 30-40 minutes just to help everyone install FTDI drivers. Students were using all sorts of operating systems and having all sorts of unexpected problems. Some were even using pre-beta version of Windows 8 64-bit… Anyways, it was not fun. What I really wanted is a board that does not need any driver installation. Whether you are using Windows, Linux, or Mac, the system should recognize the device automatically. Next is the number of external components required. Many students started designing beautiful LED patterns that involve a lot of parallel LEDs, only to find out later that the LEDs looked really dim. Why? The standard microcontroller pin can only source or sink 25mA of current. If you have a string of 20 LEDs, they will not look bright because of the current limit. The better solution is to use a transistor or mosfet to allow switching higher amount of current. Because switching LEDs is very common task in wearable electronic projects, it would be nice to have mosfets as built-in components on the board. Similarly, some students wanted to include push-buttons to their projects, but the push-button on Lilypad is only for reset, not for general-purpose function. Lastly, it would also be nice to have an on-board coin battery option, because coin batteries are cheap and easy to find in local stores.

So these experiences motivated me to develop my own wearable electronics board, and here comes the SquareWear!

Comments Off on SquareWear — A New Open-Source Wearable Electronics Board