The End of CeeFax 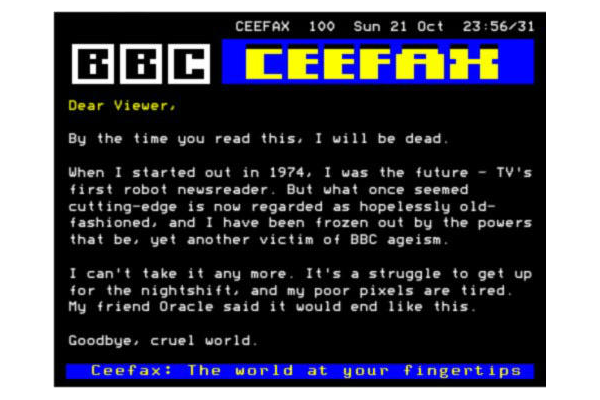 After 38 years, the BBC’s CeeFax teletext service shut down on 23:30 BST, October 23rd. The service, conceived of by BBC engineers in the early 1970’s, was originally designed to allow textual data to be transmitted to viewers alongside video data. The service worked by inserting non-video data into the blanking interval of a standard video signal (PAL in this case), similar to closed captioning here in the US.

The data transmitted by CeeFax ranged from sports scores to crime updates to programs for the BBC Micro. I can’t say I have any first hand experience of using CeeFax, but judging by the response on Twitter to this tweet by Joel Morris, and this tribute article, it seems it was many things to many people and will be missed — a neat hack that enriched a lot of people’s lives. More from BBC News:

Olympic champion Dame Mary Peters will turn off the last analogue TV signal in Northern Ireland at 23.30 BST. A series of graphics on Ceefax’s front page will mark its 38 years on the BBC.

The Plain English Campaign announced a lifetime achievement award for Ceefax’s “clarity” and use of “everyday words”.

And ex-Prime Minister Sir John Major said Ceefax would be “much missed”.

Sir John, who has previously revealed that he regularly checked Ceefax pages between Downing Street meetings to keep up to date with cricket scores, said: “Ceefax will be much missed. At moments of high pressure – with little time for detailed examination of the news – Ceefax headlines offered an instant window on the world.

Ceefax was launched on 23 September 1974 to give BBC viewers the chance to check the latest news headlines, sports scores, weather forecast or TV listings – in a pre-internet era where the only alternative was to wait for the next TV or radio bulletin to be aired.

Its premise was to give viewers free access to the same information that was coming into the BBC newsroom, as soon as the BBC’s journalists had received it.

Ceefax had initially been developed when BBC engineers, exploring ways to provide subtitles to enable viewers with hearing problems to enjoy BBC TV programmes, found it was possible to transmit full pages of text information in the “spare lines” transmitted on the analogue TV signal.

Comments Off on The End of CeeFax