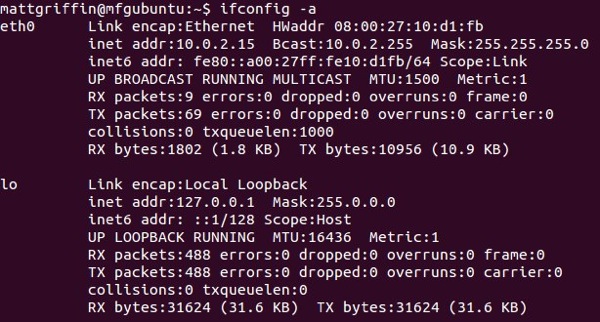 One resource that I return to time and again when I’m looking into Linux networking tasks is the Linux Home Networking site — one of the best written online guides for stepping you through the underlying structure to how networking functions from concept to execution.

Here is a basic Linux command line tool I felt worth mentioning here for those looking for networking tips for their Pi.

The first place to start is fire up a terminal. In Occidentalis, you will need to grab the Root Terminal under “Accessories” as the LXTerminal on the desktop doesn’t have this tool. Or you may be able to access the terminal for your Raspberry Pi via the WebIDE.

Type “ifconfig -a“, the command to give you information about your network devices, with the “-a” flag which according to the “man ifconfig” pages will “display all interfaces which are currently available even if down.”

In this case, $ ifconfig -a tells us a number of things about my Raspberry Pi. Typically, the eth0 interface is the one you will be using on your Pi, unless you add a wifi connection or similar.

In this case, it is not online: if it was, there would be the line:

The xx.xx.xx.xx would be a series of four numbers from 0-255, such as the IP address 192.168.1.101. This assessment is correct, because the unit isn’t even patched in, it is sitting on a tray table on an airplane over the Atlantic Ocean.

Using this tool you can make changes to the interface by typing commands such as: