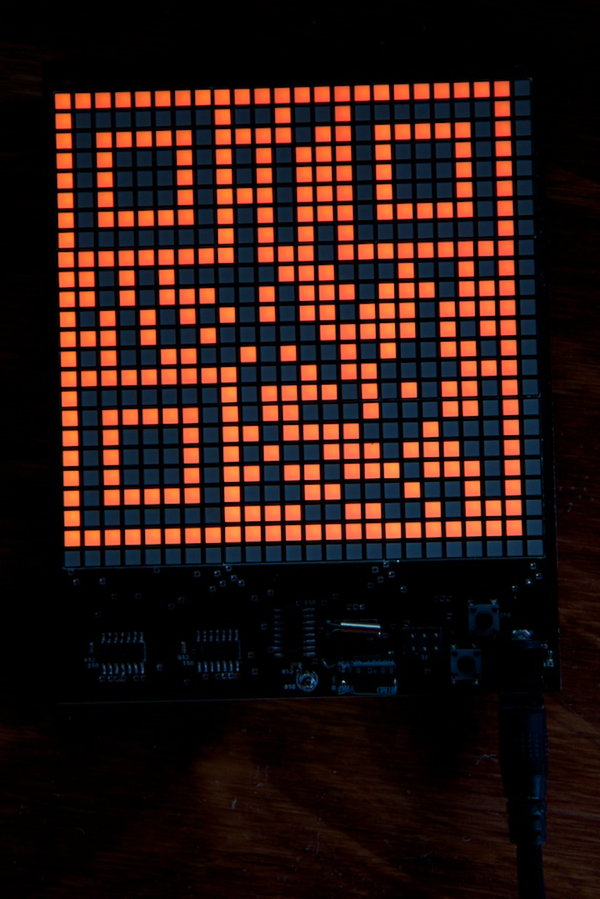 Really awesome project from Ch00ftech that uses an Adafruit Bicolor LED Square Pixel Matrix to poke fun at the ubiquitous QR codes in marketing these days — that, well, nobody really uses! (And while he mentions wondering what the project would have looked like with a White LED Matrix, we really love the amber look the Bicolor offered!)

Right? This is an idea I had at some point along my four day drive across the country. QR codes are very popular for some reason. Marketers insist that they’re useful and demand to put them in everything despite the fact that nobody uses them.

The real problem with QR codes is that they force people to use a machine to translate what could easily be human-readable information. Rather than a QR code, why not just show the text “Chevy.com” or even better just the word “Chevy” because everyone knows how to google stuff? Seriously, I’ve seen QR codes on highway billboard signs as if anyone is going to whip out their smartphone while they’re pulling 65.

So why a clock? As I’ve said before, clocks have already sort of been perfected. A digital wristwatch is probably the most convenient, accurate, and durable way to tell the time possible. Any attempt to change the typical blue-light special wristwatch will only make it more expensive or harder to read. This clock attempts to do both.

Also, this clock points out the ultimate irony of QR codes which is that they are a technological convenience that really isn’t convenient. In order to read this clock, the user will require some sort of QR scanning device which is guaranteed to have a time-telling function built into it already.

So, that’s why I made it. Hilarious, right? 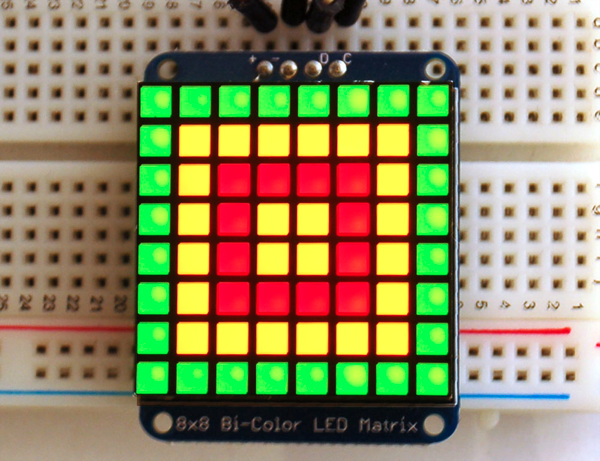 What’s better than a single LED? Lots of LEDs! A fun way to make a small colorful display is to use a 1.2″ Bi-color 8×8 LED Matrix. Matrices like these are ‘multiplexed’ – so to control all the 128 LEDs you need 24 pins. That’s a lot of pins, and there are driver chips like the MAX7219 that can help control a matrix for you but there’s a lot of wiring to set up and they take up a ton of space. Here at Adafruit we feel your pain! After all, wouldn’t it be awesome if you could control a matrix without tons of wiring? That’s where these adorable LED matrix backpacks come in. We have them in three flavors – a mini 8×8, 1.2″ Bi-color 8×8 and a 4-digit 0.56″ 7-segment. They work perfectly with the matrices we stock in the Adafruit shop and make adding a bright little display trivial. It’s called a Bicolor LED, but you can have 3 colors total by turning on the red and green LEDs, which creates yellow. That’s 3 colors for the price of 2!

The matrices use a driver chip that does all the heavy lifting for you: They have a built in clock so they multiplex the display. They use constant-current drivers for ultra-bright, consistent color, 1/16 step display dimming, all via a simple I2C interface. The backpacks come with address-selection jumpers so you can connect up to four mini 8×8’s or eight 7-segments/bicolor (or a combination, such as four mini 8×8’s and two 7-segments and two bicolor, etc) on a single I2C bus.

The product kit comes with:

A bit of soldering is required to attach the matrix onto the backpack but its very easy to do and only takes about 5 minutes.

Of course, in classic Adafruit fashion, we also have a detailed tutorial showing you how to solder, wire and control the display. We even wrote a very nice library for the backpacks so you can get running in under half an hour, displaying images on the matrix or numbers on the 7-segment. If you’ve been eyeing matrix displays but hesitated because of the complexity, his is the solution you’ve been looking for!