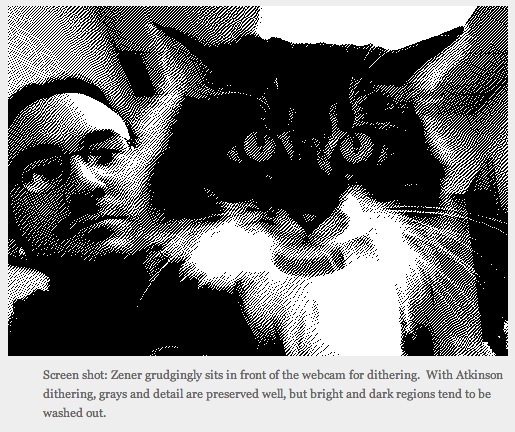 Once upon a time in the 1980′s, computers had 1-bit displays, and the world was in (at least, so we understand from the pictures) gray scale.  Those grays were often represented by various types of dithering patterns, of which one of the most classic is Atkinson Dithering.

Atkinson Dithering is named after Bill Atkinson, the developer of classic Macintosh applications MacPaint and HyperCard, where this type of dithering contributed heavily to the look and feel of computer images in the era.

There are already a number of neat applications (listed below) that can perform Atkinson dithering on source images.  Today we’re releasing a neat little Processing sketch that takes video from your webcam and performs Atkinson dithering on it in real time, to produce live video continuously processed with the effect.

Comments Off on Atkinson Dithering, Live in Processing