Charges not filed against guy with artsy watch 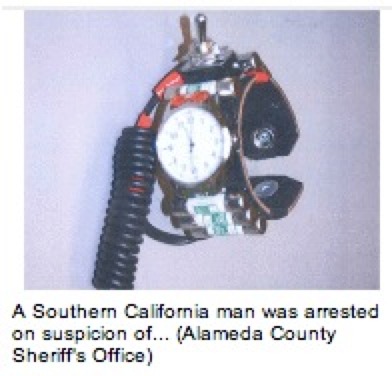 The Alameda County District Attorney’s Office has declined to file charges against a Southern California artist and teacher arrested last week at Oakland International Airport for wearing a suspicious watch.

A spokeswoman for the prosecutor’s office on Monday did not elaborate on why charges weren’t filed against Geoffrey McGann, 49, of Rancho Palos Verdes.

Horngrad said the first time McGann traveled with the watch, he showed it to a TSA supervisor at Los Angeles International Airport and the supervisor told him it was OK to wear it on the plane.

He said that when McGann went to the Oakland airport, he “acted consistently with his character, which is that of a commercial artist and teacher.”

McGann “is not an activist or a terrorist,” Horngrad said.

He said McGann has made dozens of the kind of watch he was wearing when he was arrested and said they have “a popular design among people who have seen them.”

Horngrad said any kind of device that keeps time can be used in the making of a trigger for a bomb but that McGann’s watch is handcrafted and “is more art piece than timepiece.”

Horngrad said he plans to file a motion to have his client declared “factually innocent” and will seek to have the arrest removed from his client’s record.

Part of our job as makers, hackers, designers and educators is to help the TSA and others understand that many people are making things again, it will take a few events like this but in the end everyone is getting smarter about all this. There are millions of people out there creating, it’s not going to stop, and some of them travel from time to time.

Comments Off on Charges not filed against guy with artsy watch