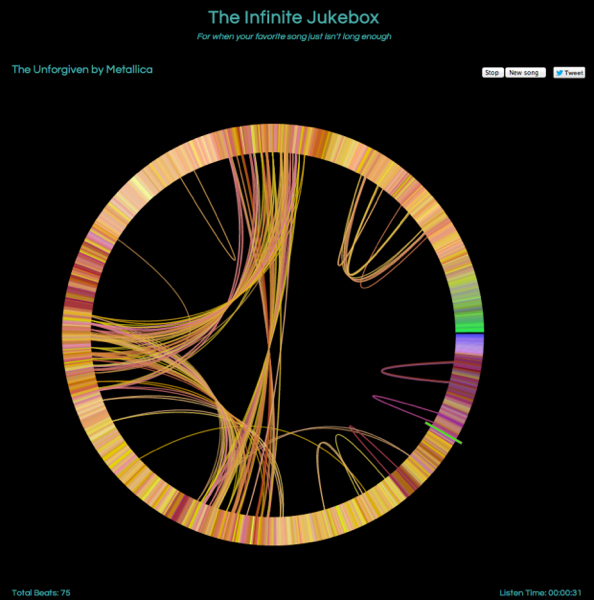 Here’s a unique weekend hack music project leaning on The Echo Nest that might well by a Pandora/Spotify/internet radio/killer at my next party: a tool that discovers relationship in parts of a song so that it can continue to slice and dice endless, seamless remixes of the same track, hour after hour.

For my weekend hack, I took the idea from my Iceland hack (Infinite Gangnam Style), and made it work with any song. The result is The Infinite Jukebox.

To accompany the playback,  I created a chord diagram that shows the beats of the song along the circumference of the circle along with with chords representing the possible paths from each beat to it’s similar neighbors.  When the song is not playing, you can mouse over any beat and see all of the possible paths for that beat.  When the song is playing, the visualization shows the single next potential beat.  I was quite pleased at how the visualization turned out. I think it does a good job of helping the listener understand what is going on under the hood, and different songs have very different looks and color palettes. They can be quite attractive.

And while you are at it, give “The Game Has Changed” by Daft Punk, “Sabotage” by the Beastie Boys, and “Come Together” by the Beatles a try! Or you can try tying somebody to a chair and launching the Infinite Gangnam Style project that Lamere was inspired by or “Nyan Nyan Cat” — they really never stops!

Filed under: music, random — by Matt

Comments Off on The Infinite Jukebox