MIDI Turning 30: How Openness Helped To Create a Revolution 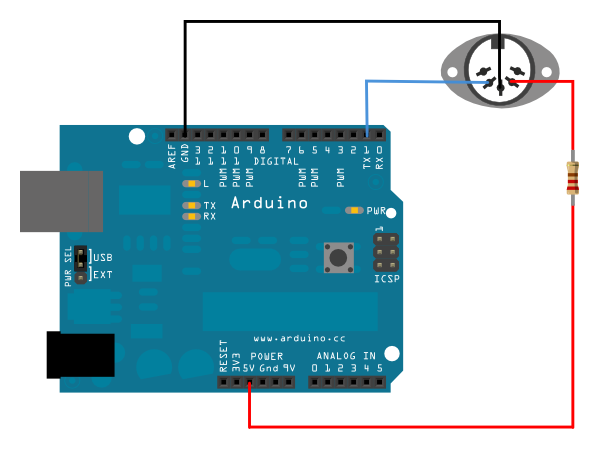 (image from the Arduino MIDI tutorial)

Great piece from the BBC on the upcoming 30th anniversary of MIDI in the wild, on the influence and impact of the technology, and why being open is a good idea:

“But [musicians] couldn’t play more than one at the same time because there was no way of electrically interconnecting them,” he remembers.

What Smith did next would transform the way recording studios worked, and create a revolution in music and recording production.

He persuaded manufacturers to adopt a common format which allowed their synthesisers to be controlled externally – by another keyboard potentially made by a rival manufacturer, or even by a computer.

The first instrument with MIDI capability was a synthesiser called the Prophet-600 – designed by Dave Smith – which rolled off the production line in December 1982.

Atari and Commodore 64 computers – hugely popular among game-playing teenagers at the time – could also be used to control MIDI instruments via a cable with 5-pin connectors at either end.

The wide availability of the format and its ease of use helped redefine pop music in the 1980s – giving it a strong electronic feel and spawning many of the contemporary music genres that followed.

“Those electronic pioneers and those people who might have been punks before could now just make stuff that people would go mad to on the dance floor,” he says.

For Dave Smith, MIDI could only become a success if every manufacturer adopted it – “we had to give it away”, he says.

The universality of the format was perhaps an early example of what now gets called “open source” technology – MIDI’s backers intended it to be a free gift to the world which allowed anyone access.

Comments Off on MIDI Turning 30: How Openness Helped To Create a Revolution