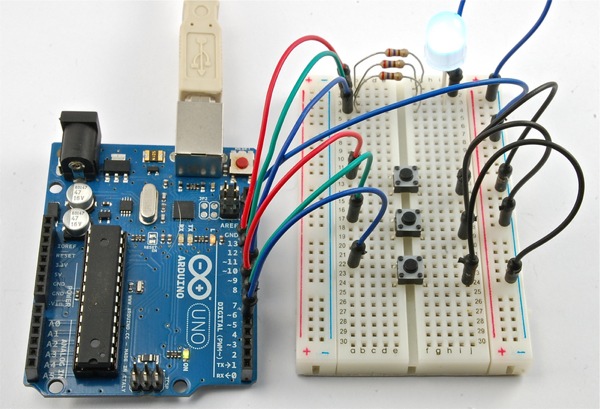 In this lesson, you will be combining some of the things that you learnt in earlier lessons to use three push switches (from lesson 6) to control the color of the RGB LED that you used in lesson 3 in order to make a Color Organ!

In this lesson, you will build on lesson 4, adding the facility to control the LEDs from your computer using the Arduino Serial Monitor. The serial monitor is the ‘tether’ between the computer and your Arduino – it lets you send and receive text messages, handy for debugging and also controlling the Arduino from a keyboard!

For example, you will be able to send commands from your computer to turn on LEDs.

In this lesson, you will use exactly the same parts and breadboard layout as Lesson 4. So, if you have not already done so, follow lesson 4 now.

In this lesson, you will learn how to use eight large red LEDs with an Arduino without needing to give up 8 output pins!

Although you could wire up eight LEDs each with a resistor to an Arduino pin (like we did for an RGB LED in Lesson 2) you would rapidly start to run out of pins on your Arduino. If you don’t have a lot of stuff connected to your ‘duino its OK to do so – but often times we want buttons, sensors, servos, etc and before you know it you’ve got no pins left. So, instead of doing that, you are going to use a chip called the 74HC595 Parallel to Serial Conveter. This chip has eight outputs (perfect) and three inputs that you use to feed data into it a bit at a time.

This chip makes it a little slower to drive the LEDs (you can only change the LEDs about 500,000 times a second instead of 8,000,000 a second) but its still really really fast, way faster than humans can detect, so its worth it!

In this lesson, you will learn how to use a RGB (Red Green Blue) LED with an Arduino. You will use the analogWrite function of Arduino to control the color of the LED. At first glance, RGB (Red, Green, Blue) LEDs look just like regular LEDs, however, inside the usual LED package, there are actually three LEDs, one red, one green and yes, one blue. By controlling the brightness of each of the individual LEDs you can mix pretty much any color you want.

We mix colors just like you would mix audio with a ‘mixing board’ or paint on a palette – by adjusting the brightness of each of the three LEDs. The hard way to do this would  be to use different value resistors (or variable resistors) as we played with in lesson 2. That’s a lot of work! Fortunately for us, the Arduino has an analogWrite function that you can use with pins marked with a ~ to output a variable amount of power to the appropriate LEDs.

In this lesson, you will learn how to change the brightness of an LED by using different values of resistor.

We’re pleased to announce we are updating all our Arduino tutorials with a new series! Arduino Lessons by Simon Monk & Ladyada in the Adafruit Learning system (learn.adafruit.com)! Simon is one of the best educational writers in the world and we also stock his fantastic book(s) here in the Adafruit store! Check back each day for a NEW lesson!

First lesson, Arduino Lesson 1. Blink. In this lesson, you will learn how program your Arduino to make the Arduino’s built-in LED blink.