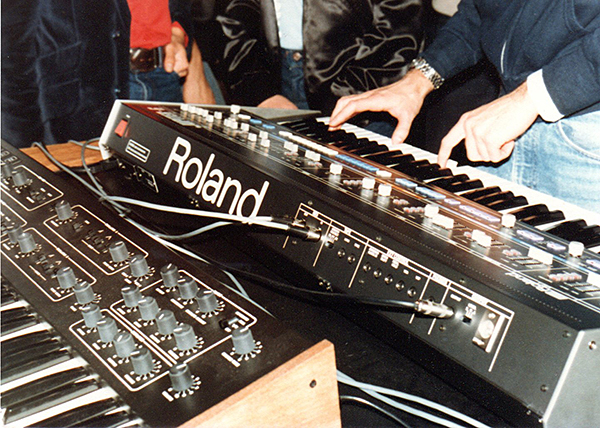 Above, the first ever MIDI interconnection, at NAMM 1983, between a Prophet 600 and a Jupiter 6. Photo by Dave Smith.

On the 30th anniversary of the MIDI standard, the two individuals most associated with it’s birth, Dave Smith (founder of Sequential Circuits) and Ikutaro Kakehashi (founder of Roland), will be awarded the 2013 Technical Grammy Award. Past winners include Les Paul, Bob Moog, Ray Dolby and Leo Fender.

From the award citation:

In 1983, Ikutaro Kakehashi, founder of Roland Corporation, and Dave Smith, president of Sequential Circuits, unveiled MIDI (Musical Instrument Digital Interface). Next year marks the 30th anniversary of the launch of MIDI, a standard that motivated the cooperation of an entire industry and helped move music technology into a new era. In a nearly unprecedented collaboration between competing manufacturers, what would soon prove an inescapable new technology was born when two competing manufacturers’ electronic keyboards were connected, enabling them to “talk” to one another using a new communication standard. The announcement ultimately revolutionized the music world. Today, MIDI is ubiquitous in the musical equipment industry, and is the de facto standard feature on virtually every electronic music product made by every manufacturer.

Filed under: art, EE — by johngineer

Comments Off on MIDI Inventors to be Awarded 2013 Technical Grammy