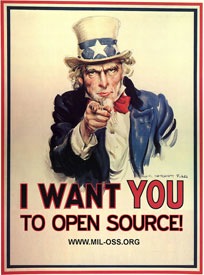 As the United States military marches further into the age of networked warfare, data networks and the mobile platforms to distribute and access them will become even more important.

This fall, the (retired) eighth Vice Chairman of the Joint Chiefs of Staff described a potential future of the military that’s founded not only in open source thinking, but in next-generation user interfaces and biohacking straight out of science fiction. If even some of the strategic thinking he described at this year’s Military Open Source Conference in D.C. is applied to how the technology that supports the next generation of war fighters is built, dramatic evolutionary changes could cascade down the entire supply chain of one of the world’s biggest organizations.