New Planet May Be Able to Nurture Organisms 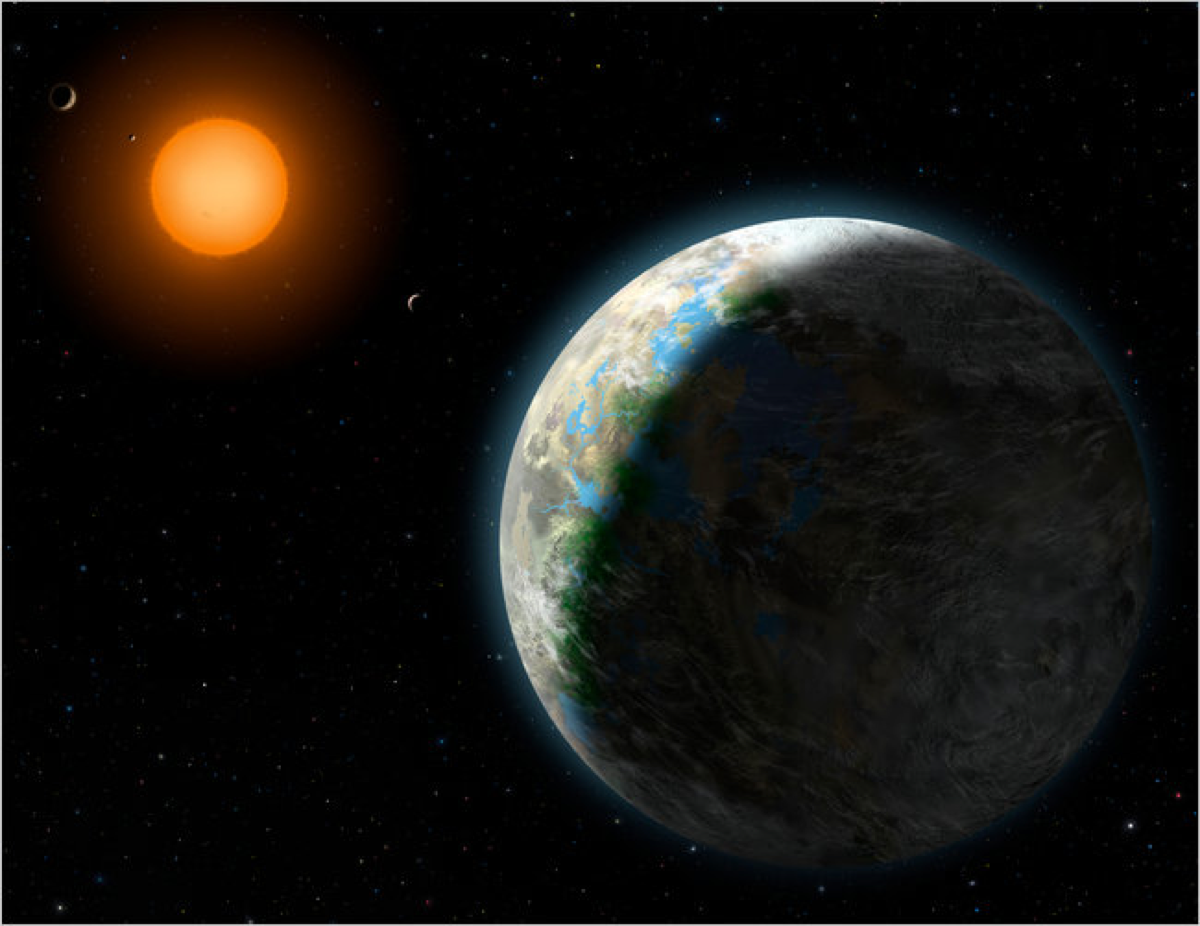 Via The New York Times:

It might be a place that only a lichen or pond scum could love, but astronomers said Wednesday that they had found a very distant planet capable of harboring water on its surface, thus potentially making it a home for plant or animal life.

A planet, as depicted in this rendering, orbits the habitable zone of a star 20 light years from Earth, meaning it could have water on its surface.

Astrophyisical Journal
Nobody from Earth will be visiting anytime soon: The planet, which goes by the bumpy name of Gliese 581g, is orbiting a star about 20 light-years away in the constellation Libra.

But if the finding is confirmed by other astronomers, the planet, which has three to four times the mass of Earth, would be the most Earthlike planet yet discovered, and the first to meet the criteria for being potentially habitable.

“It’s been a long haul,” said Steven S. Vogt of the University of California, Santa Cruz, who, along with R. Paul Butler of the Carnegie Institution of Washington, led the team that made the discovery. “This is the first exoplanet that has the right conditions for water to exist on its surface.”

In a recent report for the National Academy of Science, astronomers declared the finding of such planets one of the major goals of this decade. NASA’s Kepler satellite — which was launched in March 2009 as a way to detect Earthlike bodies — is expected to harvest dozens or hundreds.

Gliese 581g (whose first name is pronounced GLEE-za) circles a dim red star known as Gliese 581, once every 37 days, at a distance of about 14 million miles. That is smack in the middle of the so-called Goldilocks zone, where the heat from the star is neither too cold nor too hot for water to exist in liquid form on its surface.

“This is really the first Goldilocks planet,” Dr. Butler said.

Other astronomers hailed the news as another harbinger that the search for “living planets,” as Dimitar D. Sasselov of the Harvard-Smithsonian Center for Astrophysics calls them, is on the right track.

But they expressed caution about this particular planet, noting uncertainties about its density, composition and atmosphere, and the need for another generation of giant telescopes and spacecraft in order to find out anything more about it. Other Goldilocks planets have come and gone in recent years.

The discovery was announced at a news conference Wednesday in Washington, and the findings have been posted on the National Science Foundation’s Web site and will be published in The Astrophysical Journal.

Filed under: space — by Matt

Comments Off on New Planet May Be Able to Nurture Organisms