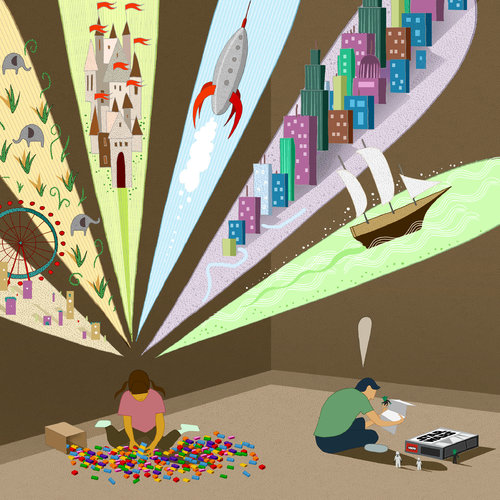 LEGO is a beloved brand among makers and many cite early experiences with LEGO construction sets as being the inspiration to drive future engineering interests. However, even though LEGO Mindstorms still plays a crucial role in teaching generations of young makers (and their adult mentors) how to solve a wide range of robotics challenges, the actual ground-level consumer LEGO kits have shifted from blocks and instructions suggesting a range of possible creations to paint-by-numbers movie replicas full of proprietary single use pieces that might never be used in a future invention. This article tackles a few of the questions parents and educators are starting to ask about the direction LEGO has taken: while they have turned around the business financially with their movie and game franchise projects, have they abandoned the spirit that made their product such a life-changing experience?

For generations of American children and their parents, Legos were the ultimate do-it-yourself plaything. Little plastic bricks, with scant instructions, just add imagination.

In a wired world, they would now seem the ultimate anachronism, the only click being the sound of blocks snapping together. This holiday season, though, Lego is again among the hottest brands, and not just for the blocks, but a raft of Lego-related video games, children’s books and a TV spinoff — many of which are hugely popular in their categories.

In leading this revival of Lego, and creating a multimedia juggernaut, executives have shown great imagination. But some parents and researchers worry that the company’s gain has come at a cost to its tiny consumers: diminishing the demand for their imagination, the very element that made the Lego brand famous in the first place.

Even when actual bricks are involved, today’s construction sets are often tied to billion-dollar franchises like “Star Wars” and “Lord of the Rings” — and the story lines therein — and invite users to follow detailed directions, not construct their own creations from whole brick. It’s less open-ended, some parents and researchers say, and more like paint-by-numbers.

“When I was a kid, you got a big box of bricks and that was it,” said Tracy Bagatelle-Black, 45, a public relations consultant in Santa Clarita, Calif., north of Los Angeles. “What stinks about Lego sets now is that they’re not imaginative at all.”

Not that she can resist the hue and cry from her children. For Hanukkah, Molly, her 11-year-old daughter, got two Lego products, neither of them blocks; her son, Alex, 5, got even more, including a Lego Darth Vader Clock, a Lego board game, a Lego sticker book — at the top of his list — and a Lego “Ninjago” video game.

Oh, yes, and he also got some traditional Legos, sort of: a Lego Super Hero Captain America and Lego Marvel Super Heroes set, both of which come with detailed instructions.

For their part, officials at Lego — a privately held, Denmark-based company — say their efforts in books, television and video games are still creatively minded and aimed at driving kids “back to the playroom.”

Each week on the Adafruit blog we post up about amazing companies, people and articles about being a MAKER and a business. Over the years we’ve shared how we run Adafruit, published code from our shopping cart system and given presentations on running an open-source hardware company. Every Monday we’re going to try to collect some of these resources and tag them #makerbusinessmonday & #makerbusiness they’re in our popular Maker Business category as well, enjoy!

Filed under: maker business — by Matt