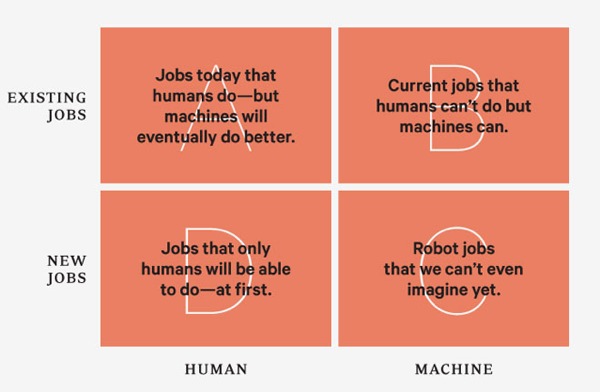 Better Than Human…. Imagine that 7 out of 10 working Americans got fired tomorrow. What would they all do?…

It’s hard to believe you’d have an economy at all if you gave pink slips to more than half the labor force. But that—in slow motion—is what the industrial revolution did to the workforce of the early 19th century. Two hundred years ago, 70 percent of American workers lived on the farm. Today automation has eliminated all but 1 percent of their jobs, replacing them (and their work animals) with machines. But the displaced workers did not sit idle. Instead, automation created hundreds of millions of jobs in entirely new fields. Those who once farmed were now manning the legions of factories that churned out farm equipment, cars, and other industrial products. Since then, wave upon wave of new occupations have arrived—appliance repairman, offset printer, food chemist, photographer, web designer—each building on previous automation. Today, the vast majority of us are doing jobs that no farmer from the 1800s could have imagined.