Handy overview for how to fake airplay speakers using a Raspberry Pi. While the latest state of this project is probably better for an installation audio project than an ideal way to listen to your music, the leap from these instructions to one using an outboard USB DAC is not far — and I look forward to trying this out in my apartment!.

I’ve had mine for a few months now but I hadn’t got around to using it yet. So I’ve now decided to try to make something that I’ve wanted for a while: a product to bring my good but dated speaker system into the 21st century by enabling wireless streaming of music to it.

A possible way to do this would be to buy an Airport Express or an Apple TV and connect the audio out to the stereo. But then I would feel like overpaying for features like video streaming or wireless routing that wouldn’t be used. Besides, those products cost around £80. Airplay enabled speakers cost £200 at the low end. This raspberry pi creation should easily come in under £30.

How to fake airplay compataility

To get a Raspberry Pi looking like an airplay receiver I made use of Shairport. This opensource software was created by James Laird after literally tearing open an airport express, dumping the ROM and reverse engineering out the private cryptographic key that airplay uses to identity of legitimate apple products. The github repo has the Perl source code that can be compiled for simple audio receiving only. For this project we essentially need to get this code running on a networked raspberry pi.

I’ll condense this down to the bare instructions for a working outcome. On the way here I had attempted many other ways to do it. I flirted with XBMC, creating a reasonably ok Apple TV-like system in the process.  But frequent crashes caused me to divert my attention to this simpler, audio-only solution.

As a word of warning, one of the common pitfalls I encountered was with the very narrow acceptable power range of the RPi. The computer is powered by usb cable and any additional loads such as a wifi adapter or a budget usb keyboard can strain this power supply past it’s limits. I had several instances of odd performance or non-responsiveness due to this…. 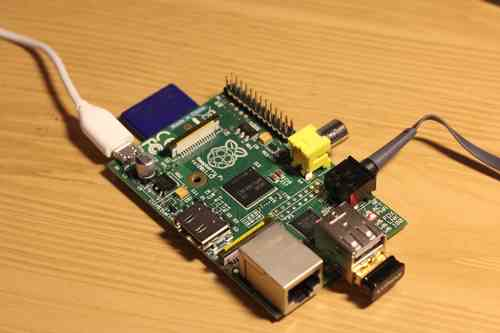