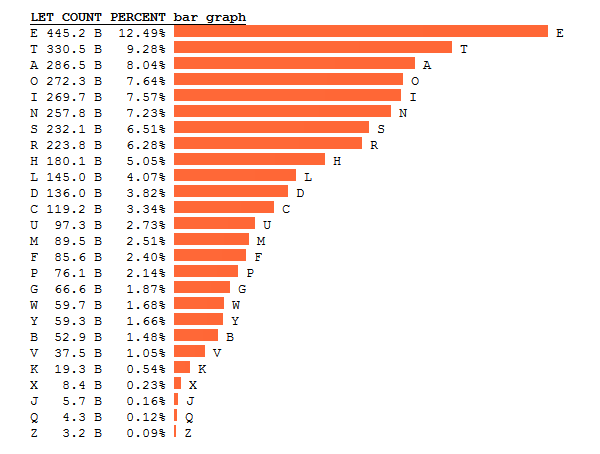 Great article by Peter Norvig about his analysis of letter frequency using the Google Books data set. Looks like ETAOIN’s got a new last name.

On December 17th 2012, I got a nice letter from Mark Mayzner, a retired 85-year-old researcher who studied the frequency of letter combinations in English words in the early 1960s. His 1965 publication has been cited in hundreds of articles. Mayzner describes his work:

I culled a corpus of 20,000 words from a variety of sources, e.g., newspapers, magazines, books, etc. For each source selected, a starting place was chosen at random. In proceeding forward from this point, all three, four, five, six, and seven-letter words were recorded until a total of 200 words had been selected. This procedure was duplicated 100 times, each time with a different source, thus yielding a grand total of 20,000 words. This sample broke down as follows: three-letter words, 6,807 tokens, 187 types; four-letter words, 5,456 tokens, 641 types; five-letter words, 3,422 tokens, 856 types; six-letter words, 2,264 tokens, 868 types; seven-letter words, 2,051 tokens, 924 types. I then proceeded to construct tables that showed the frequency counts for three, four, five, six, and seven-letter words, but most importantly, broken down by word length and letter position, which had never been done before to my knowledge.

and he wonders if:

perhaps your group at Google might be interested in using the computing power that is now available to significantly expand and produce such tables as I constructed some 50 years ago, but now using the Google Corpus Data, not the tiny 20,000 word sample that I used.

The answer is: yes indeed, I am interested! And it will be a lot easier for me than it was for Mayzner. Working 60s-style, Mayzner had to gather his collection of text sources, then go through them and select individual words, punch them on Hollerith cards, and use a card-sorting machine.

Comments Off on ETAOIN SRHLDCU