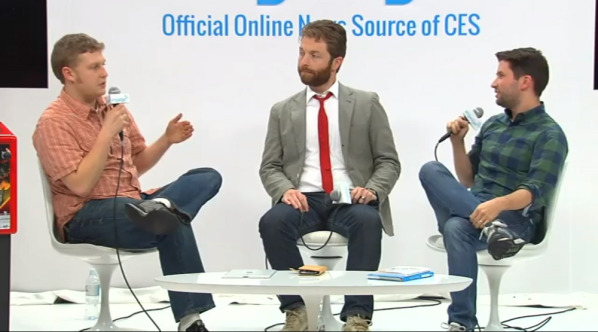 A couple of days ago, Matt Richardson from MAKE was one of the guests on Engadget’s live CES coverage. He  talked for a while about 3D printing at CES2013 as well as about his recent book Getting Started with Raspberry Pi. After you check out his notes about the experience here at MAKE, check out recordings of the talk afterwards at Engadget:

Last night after the show floor closed, I visited our friends from Engadget for their nightly CES podcast. Hosted by Editor-in-Chief Tim Stevens and Senior Associate Editor Brian Heater, the show starts with a visit from Gallagher. Yes, that Gallagher. Interestingly enough, he owns a few patents, including one that deals with slot machine software. I was a bit apprehensive about following such a legendary entertainer, but Tim and Brian put me at ease immediately. We talked about MakerBot’s announcements, Sculpteo, Belkin’s Wemo, The Sphero, pinball, and of course I had to take the opportunity to plug Getting Started with Raspberry Pi.

The folks at Engadget are very much CES veterans, so it was nice to sit down and get some of their impressions of the show and how it compares to previous iterations. The podcast is available in a bevy of audio and video formats, so you can download it to watch later or stream it now. Also check out their entire live coverage lineup for CES.

Comments Off on Matt Richardson Geeking Out with Engadget #3dthursday #raspberrypi