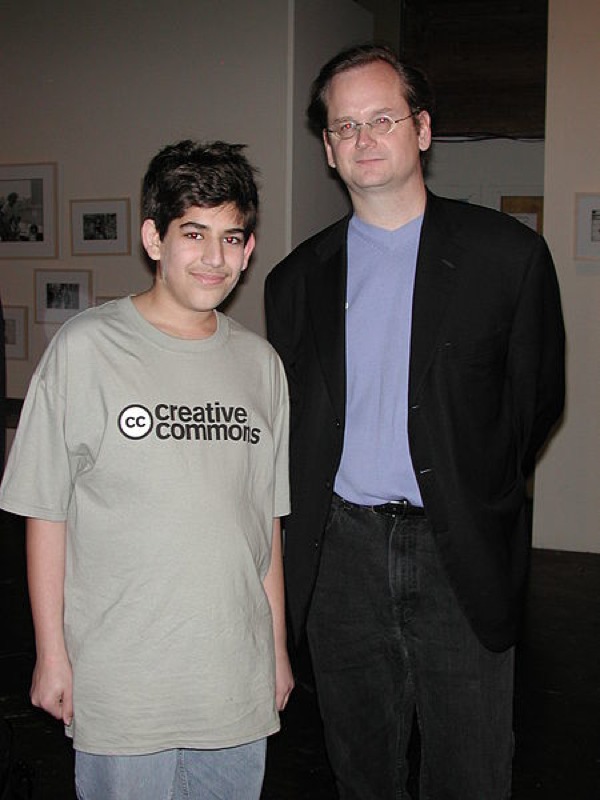 Pictured above, Aaron in 2002 (age 15) with Lawrence Lessig at the launch party for Creative Commons. Aaron Swartz – Wikipedia:

Aaron H. Swartz (November 8, 1986 – January 11, 2013) was an American computer programmer, writer, archivist, political organizer, and Internet activist. Swartz co-authored the “RSS 1.0” specification of RSS, and built the Web site framework web.py and the architecture for the Open Library. He also built Infogami, a company that merged with Reddit in its early days, through which he became an equal owner of the merged company.

Swartz also focused on sociology, civic awareness and activism. In 2010 he was a member of the Harvard University Center for Ethics. He cofounded the online group Demand Progress (best known for its campaign against SOPA) and later worked with US and international activist groups Rootstrikers and Avaaz.

On January 6, 2011, Swartz was arrested in connection with systematic downloading of academic journal articles from JSTOR, which became the subject of a federal investigation. JSTOR offended Swartz largely for two reasons: it charged large fees for access to these articles but did not compensate the authors and it ensured that huge numbers of people are denied access to the scholarship produced by America’s colleges and universities. On January 11, 2013, Swartz was found dead in his Brooklyn, New York apartment; it is reported that he had hanged himself

We only met Aaron a few times, a remarkable person, we are sad and heartbroken by the news.

Please everyone, look out for each other – we all get depressed, every smart person does – get each other help, even when it’s hard to have tough conversations about it (National Suicide Prevention Lifeline 1-800-273-TALK). Most of all, there are some big changes that need to be made so young people like Aaron are not unjustly persecuted, young people like Aaron are heroes.

Articles/posts/news about Aaron:
Official Statement from the family and partner of Aaron Swartz.
JSTOR’s public statement on Aaron Swartz.
RIP, Aaron Swartz by Cory Doctorow.
Prosecutor as bully by Lawrence Lessig.
The Truth about Aaron Swartz’s “Crime” by Alex Stamos.
My Aaron Swartz, whom I loved by quinn.
http://rememberaaronsw.tumblr.com/