I2C Programming on the Raspberry Pi with Go

George McBay as a detailed guide on how to get some Adafruit 8×8 LED Matrices working with the Raspberry Pi using the Go language.

I2C is a two-wire serial bus interface historically used to communicate between different components of an electronics device on the same circuit board.  Amidst the rise in hobbyist/open electronics and the “Internet of Things”, I2C has also become popular as a well-defined communication technology between off-the-shelf electronic project components of the type commonly sold at Adafruit, Sparkfun, and Newark.  Accelerometers, NFC chips, LED displays, and many other types of devices are available using this interface, allowing hackers to easily communicate bidirectionally with special-purpose components from their micro-controller or full-fledged computer projects.

One example of such a component that is fun to play with is the Adafruit 8×8 LED Matrix w/I2C Backpack.  This device is pretty much exactly what it sounds like, 64 LEDs arranged 8×8 that can be individually controlled over an I2C interface via an HT16K33 integrated circuit.  Starting with a few of these devices and a Raspberry Pi, I decided to delve into what it would take to drive the LEDs from my favorite language, Go.

I started by soldering the LED matrix devices to their backpacks as described here:

and hooking one up to the Raspberry Pi as described here:

Adafruit provides great support for controlling these devices and others that they carry from within Python code (available via GitHub (https://github.com/adafruit/Adafruit-Raspberry-Pi-Python-Code) and this code works well for spot-checking that the device has been successfully connected and is in working order.  All of my soldering went okay and the device worked (though I did have to modify the Python code slightly because at the time it assumed it would be driving a LED matrix on I2C bus 0, but it should have been using bus 1 because the I2C bus number designations flipped around the time the newer 512MB Raspberry Pi devices became available and my Pi is a 512MB model).

There is a whole lot more to the guide, so be sure to check it out here. 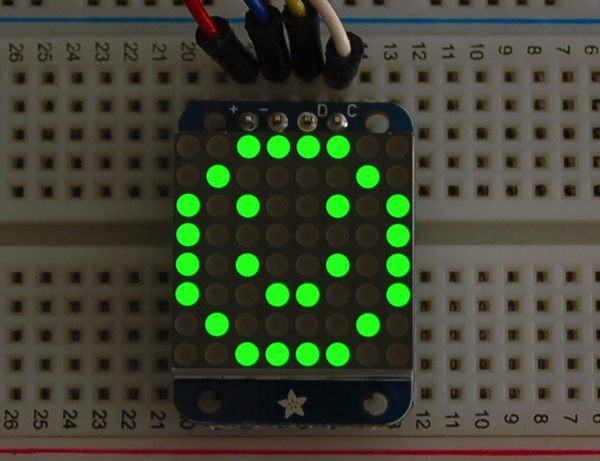 What’s better than a single LED? Lots of LEDs! A fun way to make a small display is to use an 8×8 matrix or a 4-digit 7-segment display. Matrices like these are ‘multiplexed’ – so to control 64 LEDs you need 16 pins. That’s a lot of pins, and there are driver chips like the MAX7219 that can control a matrix for you but there’s a lot of wiring to set up and they take up a ton of space. Here at Adafruit we feel your pain! After all, wouldn’t it be awesome if you could control a matrix without tons of wiring? That’s where these adorable LED matrix backpacks come in. We have them in two flavors – a mini 8×8 and a 4-digit 0.56″ 7-segment. They work perfectly with the matrices we stock in the Adafruit shop and make adding a bright little display trivial.

In Stock and Shipping Now!

Comments Off on I2C Programming on the Raspberry Pi with Go