Here’s a good one for our Maker businesses category today.

Quirky is a VC funded ($91 million) NYC based crowd-sourcing product development company. OXO is a manufacturer of kitchen utensils, office supplies, and housewares also based in New York City. We’re guessing OXO’s revenue is at least $250m/year). Both are currently engaged in a public fight over a dustpan design.

A lot of makers sent this saga in to us asking what we thought about all this (both companies are in NYC, we’ve visited the Quirky offices once before) so first up – here’s some coverage.

Quirky, a collective for inventors of clever household gadgets, recently accused OXO of ripping off one of its popular designs, the Broom Groomer, whose toothed dustbin may be used to strip the brush of debris.

It turns out, however, that the design was patented almost a century ago. OXO’s detailed description of the design’s history—which includes a winking comparison between longtime OXO products and some of Quirky’s own recent variations—turned the table with class and style. 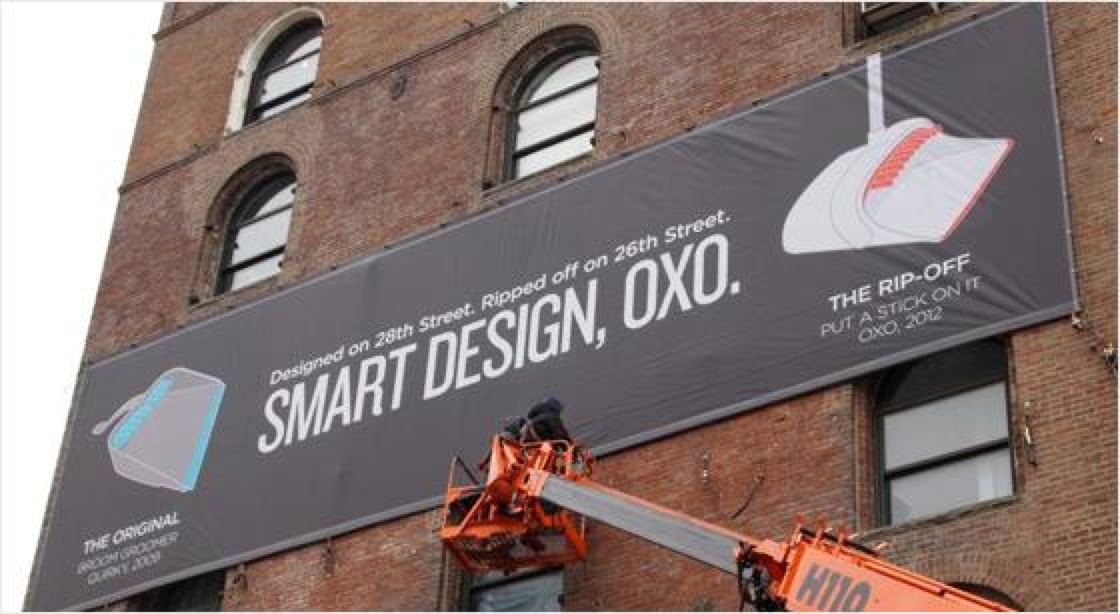 On January 21, consumer products company Quirky accused OXO and our design partner, Smart Design, of appropriating a feature from a product called the Broom Groomer, which was submitted to their community in 2009 by an independent inventor and launched in 2010. Their product includes “rubber ‘teeth’ on the back of the dustpan [that] … quickly and easily comb out dust bunnies.”

While we’re a good-natured group, we have serious respect for designers and inventors alike, and we want to make sure the design community – including everyone involved with Quirky – has all of the information needed to understand what’s going on.

The community of designers and employees at Quirky trust the leadership of the company to know which fights to pick, which ones to spend time and resources on and most of all, which ones to rally a community. This was not the one.

Quirky has a ton of funding, incredible offices (more photos) and a lot of resources – a for-profit company shouldn’t be picketing OXO a few blocks away, they should keep innovating. OXO has a stronger argument that many more designs from Quirky are based on “inspirations” from OXO products (they have many examples). 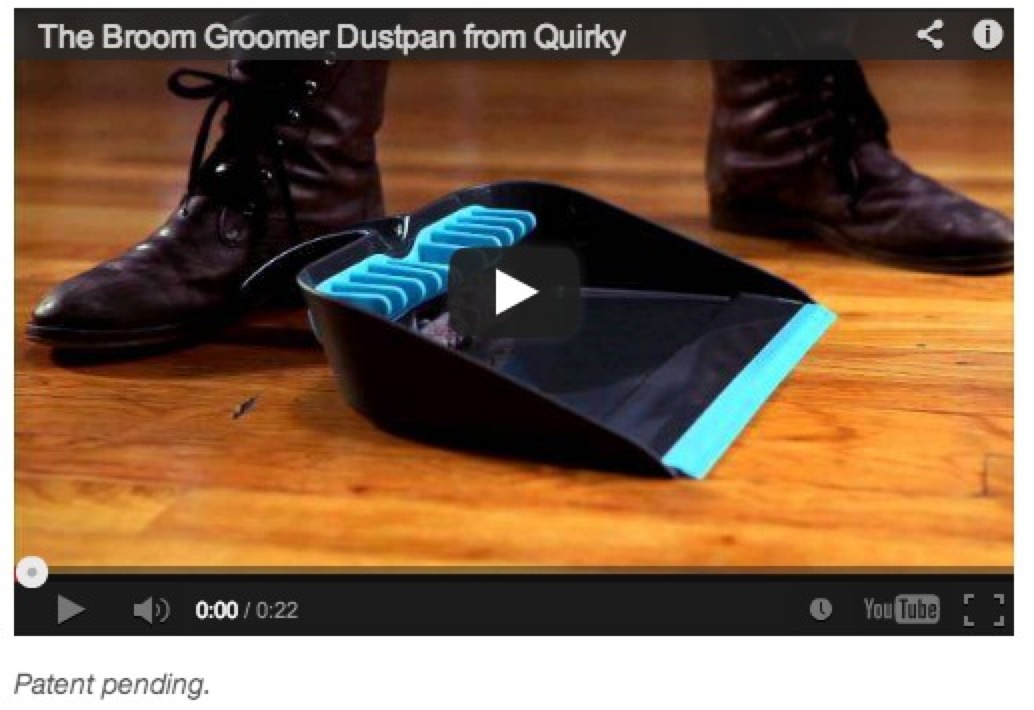 The bigger issue is the “Broom Groomer” on Quirky says “patent pending”. The legal folks advising Bill Ward (designer of the Quirky product) need to likely let him know this is not patentable and could be a waste of money & time.

2 years ago the designer, Bill Ward even talked about previous products (Quirky did not mention this at all).

In this video above “Ice cold justice” – Ben says 347 people were “robbed” and “we have all the other means available to us, we have legal protection, we have patent protection, we have these different things we can do”. The kid holding the megaphone, the braveheart sounding bagpipes, theatrics.. (nice touch!) and high production values make it clear this was an interesting, but misguided PR attempt. It doesn’t seem like there’s any legal or patent protection for Broom Groomer, if there is Quirky should include that in their statements instead of using it as a threat. Quirky’s policy regarding patents appears to be “avoid them”.

According to OXO, Ben said to them regarding IP the following:

In 2012, OXO President Alex Lee met with Quirky CEO Ben Kaufman at their office to discuss product design and innovation. At one point, Alex asked what steps Quirky took to protect the Intellectual Property (IP) of this broad community when inventors submit their idea in an open and public forum. Mr. Kaufman responded, “Nothing. Speed to market is our best protection.”

This is the problem we think, Quirky’s DNA says something different then their actions now. 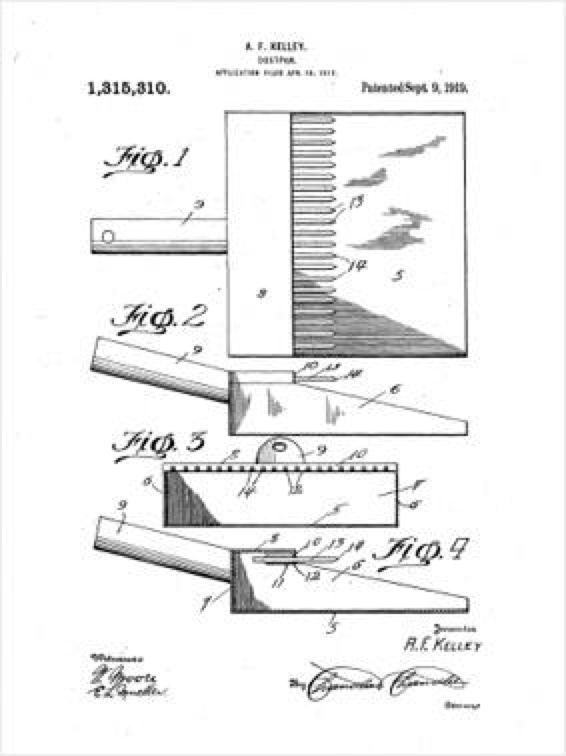 On September 9, 1919, the patent for a Broom Groomer-like idea was issued to Addison F. Kelley from Freeland Park, IN.

it must be slow at oxo if they’re basing new designs on 100 year old ideas. We are proud of the steps we have taken and confident that there will be justice for Bill Ward and the inventors of the world.

How did it end? Quirky is doubling-down.

We do not plan on further engaging in a tit for tat open letter writing campaign. We will continue to let our unique business model, innovative products, and the inventive way we go about protecting both of those things do the talking.

And what did OXO offer?

How can OXO help?
Business aside, we’re huge supporters of creativity and education in the design community. And as designers and inventors ourselves, we believe it’s our responsibility to understand the legal boundaries of our work.

To this point, one of OXO’s Senior Product Engineers, Rich, has offered to give a “Patent Process Primer” for the inventor community, one based on the experiences, frustrations and strategies around protecting IP that we have learned over the years. Naturally, all Quirky inventors and employees are welcome too.

We’re posting this up because community is a powerful card to play, there is equity you can put in and withdraw – patents, crowdsourcing and how companies interact with each other over “ownership” is something important anyone who makes things discusses.

We do open-source hardware, and so do many other companies – we do not think companies need patent protection to build a business. Quality, service and support are more important. Here’s a quote from Sparkfun.

In a recent talk, Seidle likened the alleged protections that patents offer to IP Obesity. “If your idea is unique, easily copied, and can be sold for profit in a local market, it will be,” he argues. “Ok, but that’s what patents are for, right? I don’t think they help much. Patents can cost $30,000 to $50,000. And the USPTO is so backed up you’ll have to wait three to five years to even hear back on their decision. Ask yourself, how much does technology change in five years?”

“Maybe you think I’m naive,” he continues, “Maybe you think an open source company can’t be scaled above 150 people. That’s fine, I’m sure patents will work for you. But for myself, my 135 co-workers, 75 million dollars of sales, 600,000 customers and our 431 unpatented products wish you good luck.
Eventually, says Boudreaux, they even want to open source Sparkle. “It’s a wild ride,” she says, “but a fun one for sure.”