Using a Wii controller with your Raspberry Pi, Gertboard, Bluetooth and Python:

Matt Hawkins from Raspberry Pi Spy has done the leg-work enabling Pi users to use a Wii controller – along with a Bluetooth USB dongle to send inputs to the Raspberry Pi. It uses a Python library called “CWiid” (I imagine this is pronounced “seaweed”).

This is awesome because the Wii controller has 11 different digital inputs. When you consider combinations of inputs, that gives you a lot of extra possible “input commands” to play with.

Theoretically*, with 11 buttons, there are 55 different 2-button combinations (11C2). That should be enough for most uses. If you need more than that, you could use 3-button combos.

Here’s a little video of some Wiimote controlled Gertboard madness

How do you do it then?

I followed the installation instructions on Matt’s site…

And, happily, they worked first time with my Tesco’s own-brand Technika nano Bluetooth dongle, which has a Pi-compatible chipset. I bought mine in Tesco Extra for about £4.

So I think we can look forward to seeing a proliferation of Wii remote controlled Raspberry Pi programs in the near future.

What will you do with yours?

Matt’s going to control an RC car with his. After my initial Gertboard experiments, I’d like to see if it’s possible to use two controllers for an interactive Quiz.

What will you do with yours? 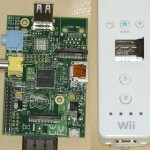 Comments Off on Using a Wii controller with your Raspberry Pi, Gertboard, Bluetooth and Python #piday #raspberrypi @Raspberry_Pi