I just got back from a quick day trip to Embedded World in Nuremberg.  EW is one of the better embedded shows since it’s a lot more engineering and lot less marketing than some of the competing shows in Europe (Electronica, etc.).  Click on through if you’re interested in my thoughts on my brief (if somewhat difficult to digest!) trip to Europe’s best show!

So, why would I go to a trade show in 2013, you ask?  Inevitably I know the details about 99% of the interesting products before they’re presented live at the show … it’s true.  Trade shows aren’t really the place you go to to hear what’s new anymore.  Companies know this too and are cutting back on what used to be a huge chunk of the marketing budget.  Spending $1,000,000 at a trade show might not be the best return on investment in this climate, and it seemed like the distributors were more center stage than was the case in the past.

BUT these kinds of shows are still really good for two things:

Number one inevitably involves lots of beer and lots of food.  Yesterday wasn’t a disappointment there!

Number two is less likely to cause a heart attack.

Even a quick one night trip to these things can end up costing $1,000 or so, but chatting 15-20 minutes face to face with the real apps engineers, product designers or product managers for whatever you’re interested in instantly gets you through the anonymous web support barrier, and your chances of getting the answer you’re looking for goes up by several orders of magnitude.  You can get the name of the person that really matter, or at least start on level 2 or 3 support, rather than tossing your bottle into the sea with level one at support@willthiswork.com?

You can also try out a $15,000 scope that’s just so much better in person than it looked on paper and try to convince yourself not to buy it … but I think that should be classified as work-related stress and be avoided rather than listed as a benefit or sought after outcome.

Back to number two, though.  I came back with 3-4 business cards that I think are helpful to me to explore some new ideas, or get a bit further with some products I’ve already been using.  In that respect, it was well worth the 700 EUR it cost me and the too long flight through Zurich (no direct Paris-Nuremberg flight available), the hotel, etc.  I met a few really helpful people, saw a few cool projects, caught up with some former colleagues I appreciate, and saw some things that made me rethink certain ideas.

So what did I see?  Two things jumped out at me.

NUMBER ONE: The show was 100% ARM.  Like, seriously … I didn’t see anything 8-bit except maybe the odd token board on a dusty back shelf somewhere, and this was from every big MCU manufacturer.  If you’re in university now and going into embedded and want a job after your studies, ARM Cortex is where you want to be.

NUMBER TWO: Judging by EW, the only business plan that seems to exist in Asia these days is making wireless modules!  Flee in terror if your great business idea is another IoT wireless module design or eco-system … you’re doomed to compete on price in a market with razor thin margins and (literally!) hundreds of competitors with sub $10 solutions-looking-for-a-problem!  I love wireless.  I make wireless modules for the fun of it.  I’ll never go into the wireless module business!  Of if I do, please slap me.  Twice.  Want to do something with wireless?  Aim higher!  Solve a real problem where wireless is just something in the background, and charge $100 for it rather than focusing on the modules and selling them with 10% margins at $9 a piece!  Why are people doing modules?  Because they don’t have a problem to solve, and they just want to piggy back on that big idea that never seems to materialize.  Please … don’t remind me of the fridge that orders milk for me.  It’s a warning sign that we’ve been using the same  use case since 1995!

But hey … photos or it didn’t happen, right!

I finally found a good use for all those giant neglected ARM9 BGA parts I’ll never use (see point 1 above … ARM Cortex is where it’s at!) … 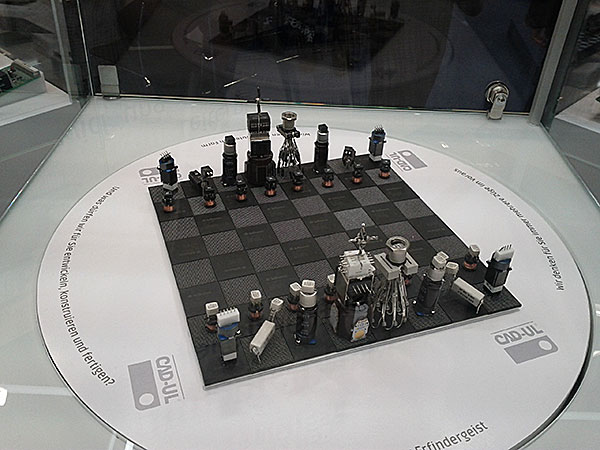 There really is a good business case behind this, though, since a lot of expensive (six figure+), highly specialized test gear is based on floppy drives.  When you have a $200K analyzer with a dead floppy drive I bet it’s easy to convince them to spend $1K on something like this … though I admit I took the photo for the lulz: 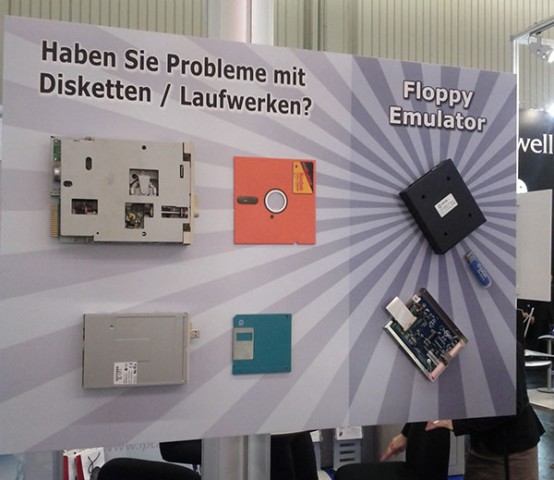 This thing really was huge … though it did look kind of dodgy as cake’s go and not entirely lead free, so it was easy to resist biting into it … 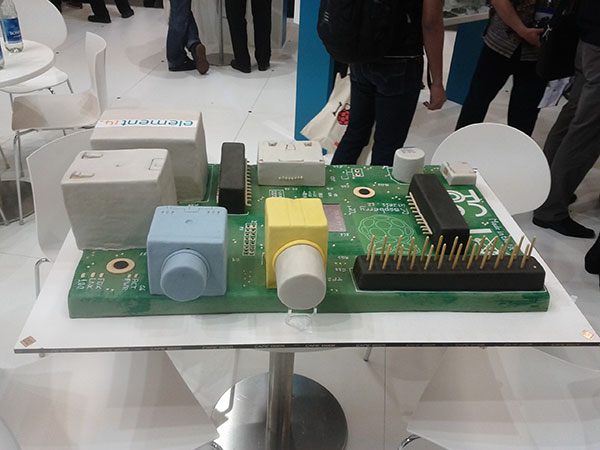 I don’t know .. I just seem to have some sort of weird fetish for test fixtures, and fancy probe holders like this.  I actually have something similar and rarely use it (I’m hardly inspecting bare dies here) … but the attention to detail in this stuff is still fun to look at … 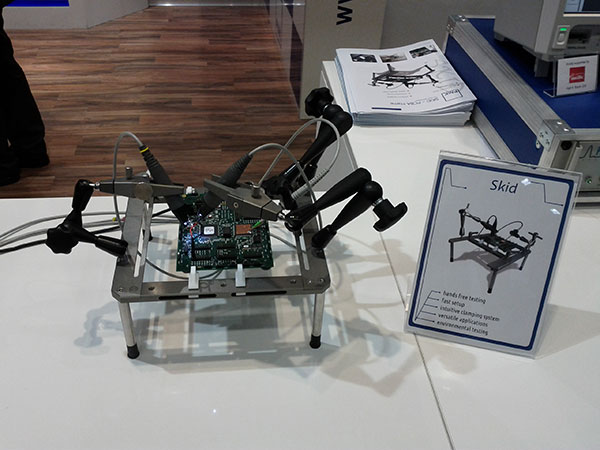 Anyone else make the trip to EW2013?  Feel free to post your thoughts up on the comments below!

Filed under: EE — by Kevin

Comments Off on Embedded World 2013 review … err, sort of