While the demand for ever-smaller electronic devices has spurred the miniaturization of a variety of technologies, one area has lagged behind in this downsizing revolution: energy-storage units, such as batteries and capacitors.

Now, Richard Kaner, a member of the California NanoSystems Institute at UCLA and a professor of chemistry and biochemistry, and Maher El-Kady, a graduate student in Kaner’s laboratory, may have changed the game.

The UCLA researchers have developed a groundbreaking technique that uses a DVD burner to fabricate micro-scale graphene-based supercapacitors —  devices that can charge and discharge a hundred to a thousand times faster than standard batteries. These micro-supercapacitors, made from a one-atom–thick layer of graphitic carbon, can be easily manufactured and readily integrated into small devices such as next-generation pacemakers.

The new cost-effective fabrication method, described in a study published this week in the journal Nature Communications, holds promise for the mass production of these supercapacitors, which have the potential to transform electronics and other fields.

“The integration of energy-storage units with electronic circuits is challenging and often limits the miniaturization of the entire system,” said Kaner, who is also a professor of materials science and engineering at UCLA’s Henry Samueli School of Engineering and Applied Science. “This is because the necessary energy-storage components scale down poorly in size and are not well suited to the planar geometries of most integrated fabrication processes.”

The process of miniaturization often relies on flattening technology, making devices thinner and more like a geometric plane that has only two dimensions. In developing their new micro-supercapacitor, Kaner and El-Kady used a two-dimensional sheet of carbon, known as graphene, which only has the thickness of a single atom in the third dimension. 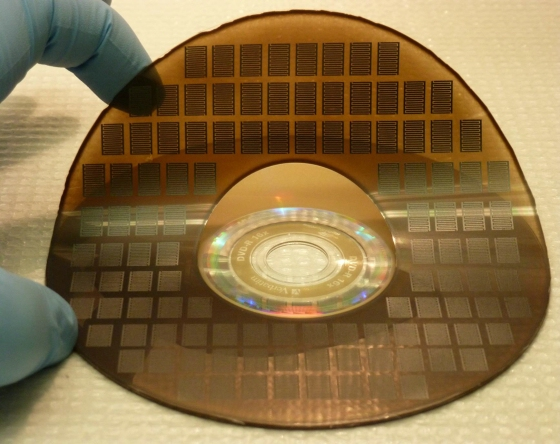 Filed under: components & parts — by Matt