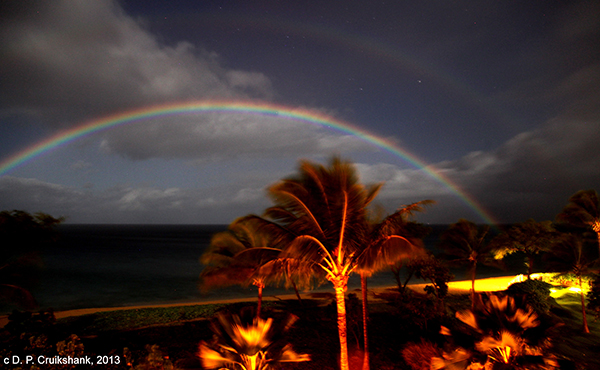 Twice as good as a single lunar rainbow, which is already pretty good!

From the Lunar Science page at Nasa:

A moonbow (also known as a lunar rainbow, white rainbow, lunar bow, or space rainbow) is a rainbow produced by light reflected off the surface of the moon (rather than from direct sunlight) refracting off of moisture in the air. Moonbows are relatively faint, due to the smaller amount of light reflected from the surface of the moon. They are always in the opposite part of the sky from the moon.

Because the light is usually too faint to excite the cone color receptors in human eyes, it is difficult for the human eye to discern colors in a moonbow. As a result, they often appear to be white. However, the colors in a moonbow do appear in long exposure photographs.

Filed under: art, science — by johngineer