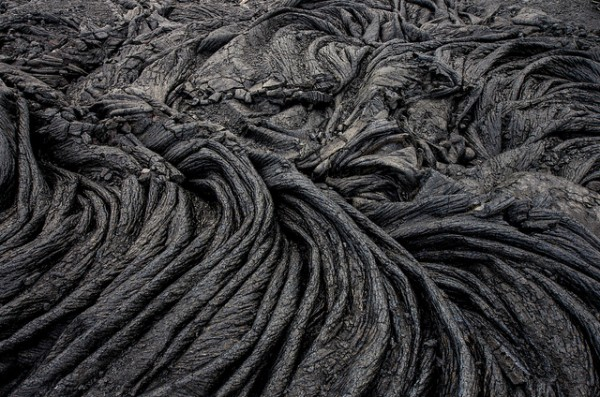 Fascinating article about the physics of lava formations @ Nervous System:

Lava is the molten rock expelled by a volcano during an eruption. Lava flows can have very different properties based on their chemical composition, temperature, eruption rate, crystal content, and bubble content. The current lava flow in Hawaii is an effusive flow of basalt with low viscosity and high temperature. It flows quickly and smoothly, leaving glassy rippled rock in its wake. Geologists call this type of flow pahoehoe, a Hawaiian name that equates the lava forms to swirling water (“hoe” = to paddle). This is an apt name as the lava rock is festooned with incredible patterns of contorted wrinkles, ripples, and folds. What causes these forms?

When lava flows, the outside layer quickly cools forming an exterior crust. In fact, many of the lava patterns we found were quite thin and hollow inside where the lava had subsequently evacuated after the structures were formed. This cooled layer is significantly more viscous than the lava below acting like a viscous sheet. Folds begin to form when the flow compresses due to the slowing of the flow front. This compression could be caused by hitting an obstruction or entering a narrow channel. These folds form in the span of seconds to minutes.