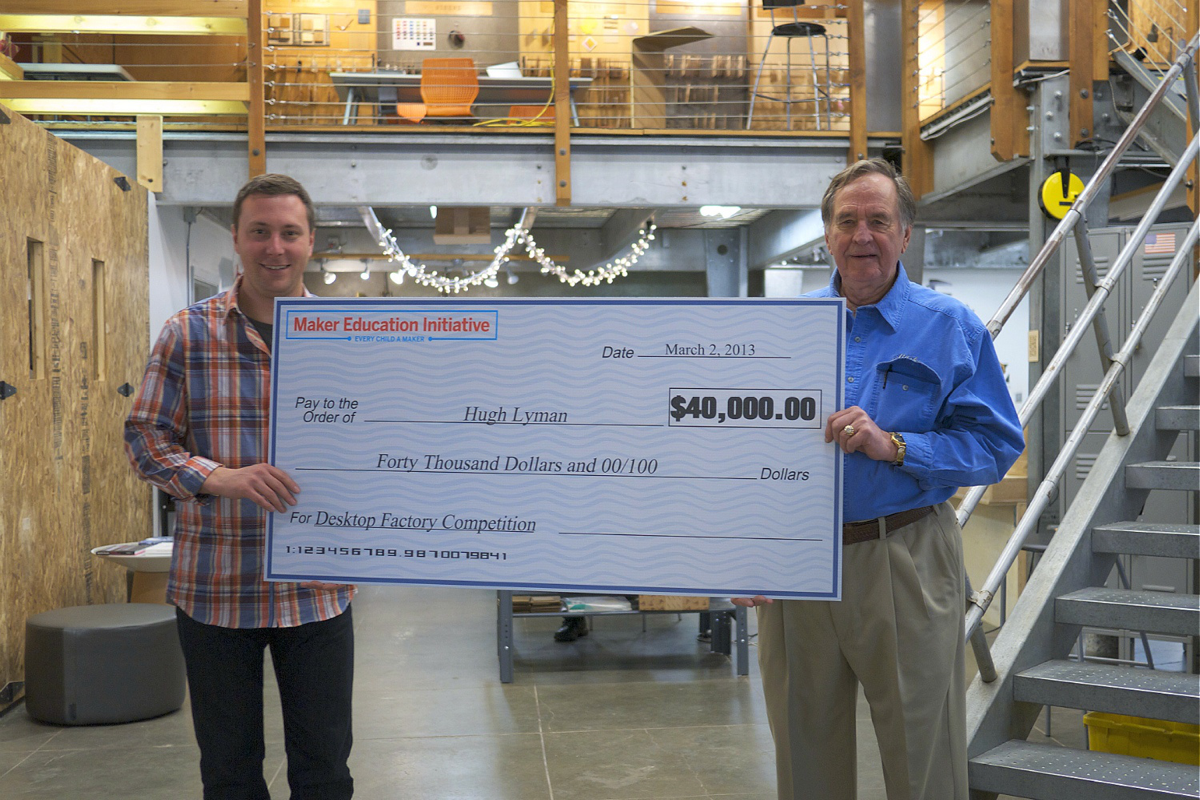 And here’s my favorite story of #3dthursday this week! 83 year old retiree inventor competed in the Desktop Factory Competition come up with a machine to offer an incredibly inexpensive solution for at-home filament manufacture from pellets, winning a $40,000 bounty happily presented by Inventables CEO Zach Kaplan.

Here’s an excerpt from TIME Tech — the entire article is worth a read!

It’s not startling that someone successfully met the challenge posed by the contest; 3D printing enthusiasts are, almost by definition, enterprising and inventive. And the $40,000 bounty was certainly alluring. But it’s unlikely that anyone involved in the competition would have guessed that its winner would be an enterprising inventor who happened to have been born during the Hoover administration.

That inventor is 83-year-old Hugh Lyman, who lives near Enumclaw, Wash., 35 miles southeast of Seattle. Until he retired 17 years ago, Lyman ran Ly Line Products, a manufacturer of scientific cabinetry and related items such as fume hoods. He’s been a forward-thinking technologist for a long time: in 1976, Computerworld magazine wrote about Ly Line’s use of the IBM 5100, an early “portable computer” which weighed 55 pounds.

Today, he engages in his share of classic golden-years pursuits: He is, for instance, an avid fisherman and golfer. But he’s also a passionate participant in the maker movement.

“After I retired in 1996, I started doing some inventing,” says Lyman, whose creations include a table-top gizmo which binds stacks of loose paper into pads. “I designed a few products, and I had them made on a 3D printer….and then I forgot about it.” Years later, he learned about kits for building low-cost desktop 3D printers. He built one, and then another and then another. And he’s used them to print everything from bracelets for his wife to statues of Aphrodite for friends to parts for his inventions.

When Lyman heard about the Desktop Factory Competition, he was instantly intrigued, in part because he’d benefit if the problem it set out to address was solved. “Every time I buy a couple of pounds of filament, it costs me forty to fifty bucks,” he explains. “I was burning through it pretty fast.” He also shared the contest organizers’ vision of pervasive, democratized manufacturing: “I would think that at least half the homes in the world will eventually have a 3D printer.”

Lyman describes himself as an “undergraduate engineer” — he studied engineering from 1948-1953 at the University of Utah, but didn’t earn a degree. Though he holds eight patents, he says he’s “not educated enough to be able to do calculations of torque and so forth.” So implementing his contest entry “was trial and error. I tinkered with it and used common sense.”

His first entry, the Lyman Filament Extruder, could indeed turn inexpensive plastic pellets into filament. But when Lyman entered the device in the contest in August of 2012, it was disqualified on the grounds that it failed to come in under the $250 limit for parts; he hadn’t accounted for the cost of a few parts he’d fabricated himself.

So he returned to his drawing board and came up with the Lyman Filament Extruder II. “It’s my first machine with a few little parts changed,” he says. “I resubmitted it, and it worked. It worked great.” The judges agreed and declared him as the winner.

With either Lyman Extruder, you fill a hopper with plastic pellets, then flip a switch to turn on a heater. The contraption melts the pellets, then squeezes the resulting molten plastic into filament which emerges from a nozzle and coils on the floor….