Apparently a big project brewing for Lucas Ainsworth and Alyssa Hamel of Kinetic Creatures — check out this post over at MAKE for more details!

Despite having just submitted their application for Maker Faire Bay Area, Lucas Ainsworth and Alyssa Hamel of Kinetic Creatures are already hard at work on the project they have planned for their second appearance at the fair: an enormous, bike-powered, cardboard “Rory the Rhino.” At last year’s Bay Area fair, the couple had just launched a Kickstarter campaign to jumpstart the production of their Kinetic Creatures, a set of three cardboard animal kits that cleverly fold and slot together to yield Rory the Rhino, Gino the Giraffe, and Elly the Elephant.

The introduction of a handcrank or simple gear box mechanism allows the animals to move. Lucas, an industrial designer and researcher at Intel, and Alyssa, an art teacher and artist, had been toying around with the designs for a few years, and they finally decided it was time to make them a reality. The Kickstarter campaign was successful, netting double their initial goal of $22,000, and soon Kinetic Creatures were making their way around the world. For this year’s fair, though, they wanted to go bigger by literally enlarging the design of Rory. They plan to build a roughly human-sized version of the rhino, still out of cardboard, and attach a bike in front of the rhino as the gear mechanism, allowing fair visitors to pedal the bike to make the rhino move… 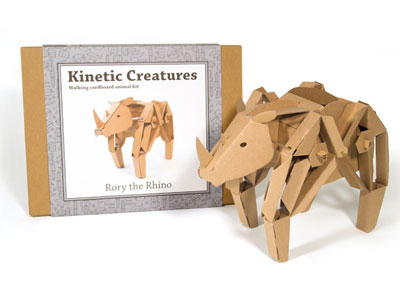