Drone Makers Get Help From the Open-Source, DIY Crowd 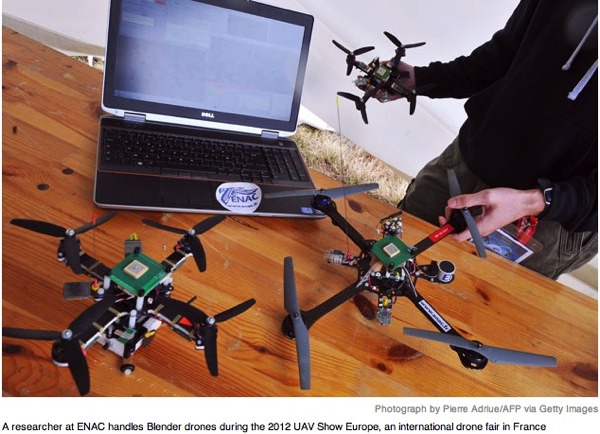 Drone Makers Get Help From the Open-Source, DIY Crowd – Businessweek.

more people, including startups, an opening in the $1.6 billion market for drone design, which will almost double in a decade, according to the aerospace and defense consulting firm Teal Group. Online support is “quite a game-changer,” says Jeff Moe, chief executive officer of open-source 3D printer company Aleph Objects. “You have collaborative worldwide development of hardware and electronics.”

The teamwork extends from pilotless aerial vehicles that spray crops or map coral reefs to those that detect radiation. DIY Drones, an online community founded by former Wired Editor-in-Chief Chris Anderson, has more than 35,000 members and provides free access to thousands of schematics. Its pages receive more than 2 million views per month, says Anderson, whose own company, 3D Robotics, is making use of the crowd-sourced R&D. “We’ve been able to bring this huge amount of energy, ideas, and talent to bear for free that otherwise would have taken millions of dollars,” he says, citing his drone autopilot software, radios, video components, and camera controls among the designs he developed with help from DIY.

Comments Off on Drone Makers Get Help From the Open-Source, DIY Crowd