The True Cost of Science Publishing 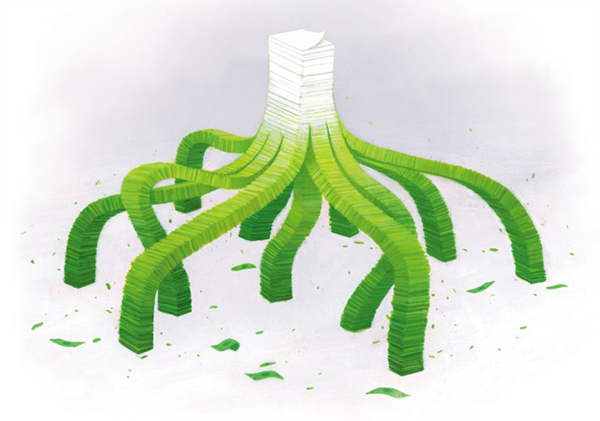 (image by Brendan Monroe via Nature)

An eye-opening piece in Nature about the cost of science publishing:

Michael Eisen doesn’t hold back when invited to vent. “It’s still ludicrous how much it costs to publish research — let alone what we pay,” he declares. The biggest travesty, he says, is that the scientific community carries out peer review — a major part of scholarly publishing — for free, yet subscription-journal publishers charge billions of dollars per year, all told, for scientists to read the final product. “It’s a ridiculous transaction,” he says.

Eisen, a molecular biologist at the University of California, Berkeley, argues that scientists can get much better value by publishing in open-access journals, which make articles free for everyone to read and which recoup their costs by charging authors or funders. Among the best-known examples are journals published by the Public Library of Science (PLoS), which Eisen co-founded in 2000. “The costs of research publishing can be much lower than people think,” agrees Peter Binfield, co-founder of one of the newest open-access journals, PeerJ, and formerly a publisher at PLoS.

But publishers of subscription journals insist that such views are misguided — born of a failure to appreciate the value they add to the papers they publish, and to the research community as a whole. They say that their commercial operations are in fact quite efficient, so that if a switch to open-access publishing led scientists to drive down fees by choosing cheaper journals, it would undermine important values such as editorial quality.

Data from the consulting firm Outsell in Burlingame, California, suggest that the science-publishing industry generated $9.4 billion in revenue in 2011 and published around 1.8 million English-language articles — an average revenue per article of roughly $5,000. Analysts estimate profit margins at 20–30% for the industry, so the average cost to the publisher of producing an article is likely to be around $3,500–4,000.

Most open-access publishers charge fees that are much lower than the industry’s average revenue, although there is a wide scatter between journals. The largest open-access publishers — BioMed Central and PLoS — charge $1,350–2,250 to publish peer-reviewed articles in many of their journals, although their most selective offerings charge $2,700–2,900. In a survey published last year2, economists Bo-Christer Björk of the Hanken School of Economics in Helsinki and David Solomon of Michigan State University in East Lansing looked at 100,697 articles published in 1,370 fee-charging open-access journals active in 2010 (about 40% of the fully open-access articles in that year), and found that charges ranged from $8 to $3,900. Higher charges tend to be found in ‘hybrid’ journals, in which publishers offer to make individual articles free in a publication that is otherwise paywalled (see ‘Price of prestige’). Outsell estimates that the average per-article charge for open-access publishers in 2011 was $660.

Comments Off on The True Cost of Science Publishing