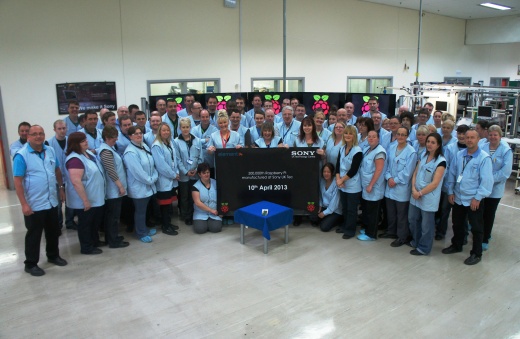 Update from the Raspberry Pi Foundation about the process of shifting more and more Pi production over to Wales since last fall — and they have reached the milestone of 500,000 Pi units in Wales! (And check out the short article linked below for more of the story!)

As you’ll know if you’re a regular reader of this website, production of the Raspberry Pi started in China back at the start of 2012, but has been gradually moving to Wales since last September. One of our distributors, Premier Farnell/Element14, already makes 100% of its Pis in the Welsh Sony factory in Pencoed, where Pis are built under licence. The other, RS Components, is in the process of moving the vast bulk of its manufacture to Wales as well (although they will continue to make a much reduced number of Pis in China for the Far East market).

Sony’s only been making Pis for us since September, but today they announced that the 500,000th Pi has just rolled off their lines. At the moment nearly 40,000 Pis are being made in Pencoed every week, and that number is set to climb further (I have some projections I’m not allowed to share, but they did make me swallow sharply when I read them) – even at these numbers we’re still having trouble meeting demand around the world. We sold our millionth Pi in January. Soon there will be more Made in the UK Pis in the world than their Made in China cousins.

This is wonderful news for us; and it’s great news for Welsh manufacturing. I wrote a short article about our decision to move to Wales for IT Wales last week; if you’re interested in why we made the move, it’s worth a read. I apologise for the awful portrait picture.

This group photograph is of all the people at the factory who have a hand in making your Pi – I had a go at counting them with my cursor, and I came out with a fairly astonishing 68 people. Thank you so much for all your hard work, everybody (and hi, Ricky!).

Comments Off on 500,000 Pis in Wales #piday #raspberrypi @Raspberry_Pi