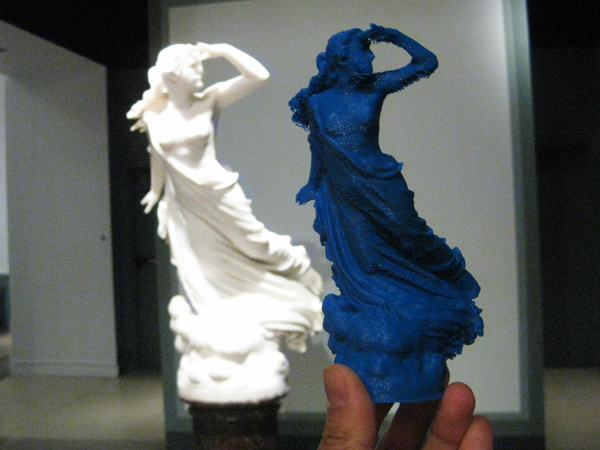 Check out David Huerta’s write-up “Replicating a 19th Century Statue with 21st Century Tech” over at the Brooklyn Museum blog, and follow through to the full article for details of the challenges he has faced experimenting with photogrammetry tools for creating digital models of real-world sculptural pieces:

My first exposure to the world of 3D printing took place in 2009 approximately 500 feet under the Earth’s surface in a former missile silo in the Washington state desert. There, three founders of a new Brooklyn-based 3D printer company hosted a workshop on building a 3D printer kit as part of Toorcamp, a nerdy version of Burning Man. At the end of the kit’s 4-hour assembly we printed out some tiny jewelry boxes. At the time 3D printing seemed to me like a novel technology for hackers with lots of potential, but not one I had any specific use for. Four years later, that use was found.

Museum sculptures are an interesting case in accessibility; they exist in a place the public can access but usually aren’t allowed to touch. Most sculpture materials aren’t too smelly or noisy so that limits the sensory experience to sight. However, not everyone has the ability to see, and although special exemptions are occasionally made to allow the visually impaired to touch some sculptures, you can only feel so much of a large object.

Sight includes the ability to expand the size or detail of what you’re looking at by moving closer or further away from the object. This isn’t possible in the two-dimensional web, so the paradigm of pairing a “thumbnail” image with a full-size counterpart became an established method for having both a high-level and up-close view of things. With similar constraints in mind, we’ve utilized 3D scanning and printing to create a “thumbnail” for large sculptures which can be used as a tactial maps of the object’s entire shape.

So how do you go from marble masterpiece to plastic replica? Like 3D printing, 3D scanning has also recently broken out of the expensive-equipment-for-expensive-professions world and into the much more afforable world of hobbyists and institutions with modest budgets. AutoCAD’s 123D Catch is a free download which was launched last year as a way to create 3D models from photos using stereophotogrammetry, which basically means taking a bunch of photos from different angles and letting software figure out how far away stuff in one photo is from stuff in the next…. 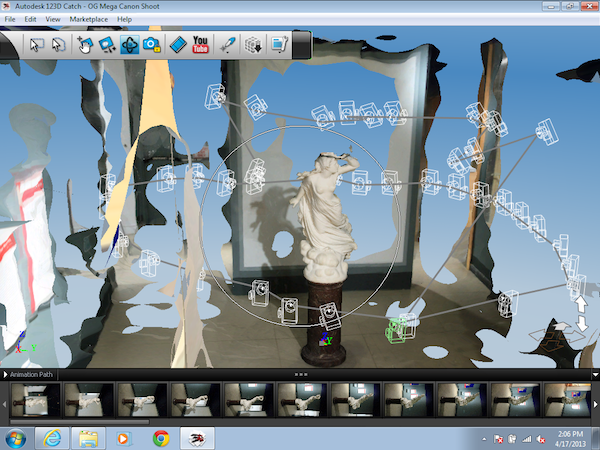