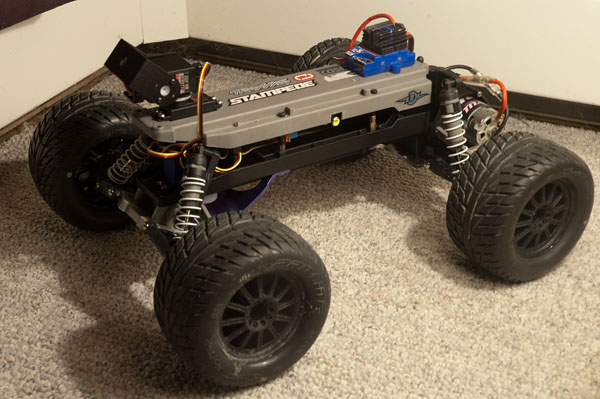 Thanks to Doug Roberts for sending in his RasPi remote rover project. He said: “I thought I would share my project, as most of the components come from Adafruit… My project is almost finished, just waiting for the Pi’s Camera Module.” Really cool mod project, thanks for sharing!

My wireless rover..   Powered by a Raspberry pi, controlled over wifi.

Based on a Traxxas Stampede XL-5, this remote rover is powered by a 2S 20C 5000mAh 7.4 volt LiPo battery, using a Castle Creations BEC to provide the 5v needed for the Pi.

An Adafruit 12bit, 16 channel PWM servo driver is used to control all of the servos, including steering and throttle.  The servo driver requires 6v which is provided from the Traxxas XL-5 speed controller.
The Traxxas XL-5 speed controller also provides the LiPo cut off protection which activates when a single cell goes below 3.2 volts.
A miniature USB WiFi module is used for wireless communication.
As of this posting, the rover hosts a python TCP server and a windows WPF application is used a as client.

A few idea’s I’ve been toying with is to switch the rolls, having the rover be the client and it connecting to a server, as well as adding another wifi module.

This would allow me to jump from one network to another, without needed to modify router settings on the network, if I were to control it over the internet.

My other option would be to use a CDMA modem, like a rogers/bell stick.  Using the cell towers for internet, my range would be almost unlimited. 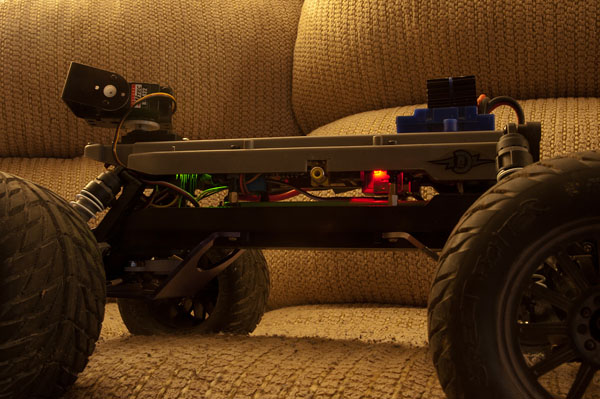