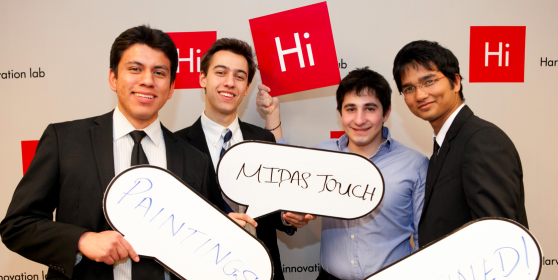 From the perspective of art restoration and research, all paintings are sculptural artifacts — with laters of pigment piled up in a particular stroke order of touches by brush, pallet knife, drip, etc.. But while this may be the case, this tactile information tends to be available only to the visual scanning and topology instruments and not to the humans standing near to them — for rather obvious reasons.

No one is going to let you touch masterworks of oil or acrylic because the oils in your hands and the friction of your fingertips have the potential to damage or change the surface of the work. However, take a look at this project Midas Touch — which approaches the task of transforming the 2.5D sculptural potential of visual artworks even further to help provide safe “tactile-viewing” replicas of this fragile work by running computer graphics processes to generate a 3D printable model of works of visual art for the visually impaired. From Venture Beat:

For the visually impaired, the basic problem with art is that they can’t see it. But with a project called “Midas Touch” a group of Harvard kids say they have a fix: Use 3D printing to help the blind “see” what they cannot actually see.

“We want to bridge the gap between the visually impaired and the visual world of art,” Constantine Tarabanis, one of the brains behind the project, told me.

Basically, what Midas Touch does is take a flat image — say, of “Starry Night” — and use 3D printing to add layers of texture to it, creating an image that’s half painting, half relief sculpture. Essentially, Midas Touch takes the visual nature of art and translates it to a physical world that the visually impaired can understand.

In theory, anyway. The thing to keep in mind with Midas Touch is that the whole project is at this point a concept. While Tarabanis and his team have a great idea and a bunch of funding, they’re still working on creating working prototypes to prove their idea has legs.

As result, its a bit tough to fully understand or even convey what we’re talking about here — and somehow, I’m fine with that: In fact, the inability to describe Midas Touch is in its own way a meta-reference to what the project is trying to accomplish. How do you understand something that you can’t see? …