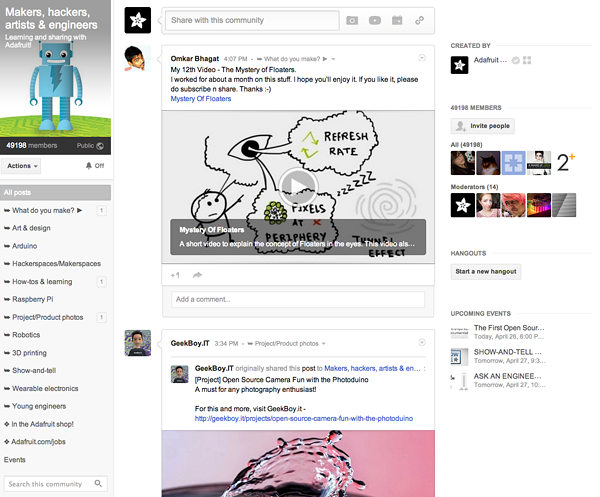 So many projects this week, the Adafruit community is nearly visible from space! (Well, the LEDs might have something to do with this.)

Check out a whole slew of new entries from the Adafruit 6 Second Electronics Film Festival as well as great projects from the Google+ Community, the Adafruit blog, and all of the places where our community congregates.

There are people making amazing things around the world, are you one of them? Join the 49,198 strong! And check out scores of projects they shared this week after the jump!

After a wee bit of tweaking, Dustin Evans from Wichita, Kansas demoed his RGB Spectrum Analyzer project last week on Adafruit Electronics Show and Tell. “One side reads the left channel and the other side reads the right channel. I have another strip of LEDs coming in the mail. I want to get at least five channels working.” (read more) Featured: 4/20/2013 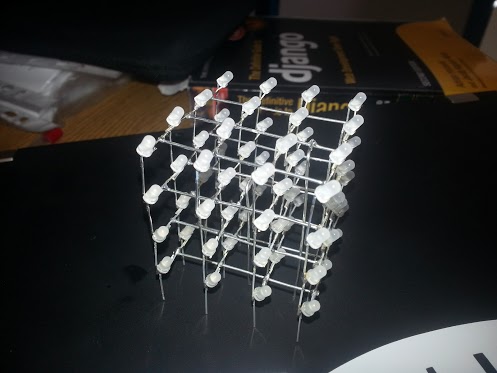 Robin Fordham shared his cube MK1 LED project. “This is a practice project before I build an 8x8x8 cube﻿.” (read more) 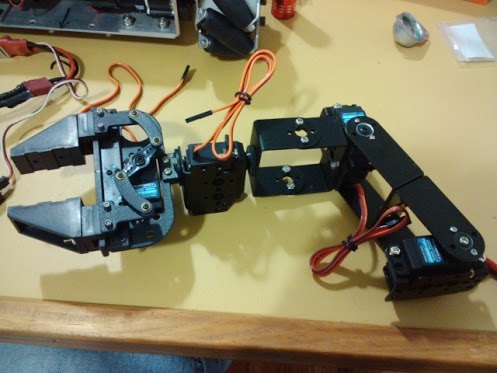 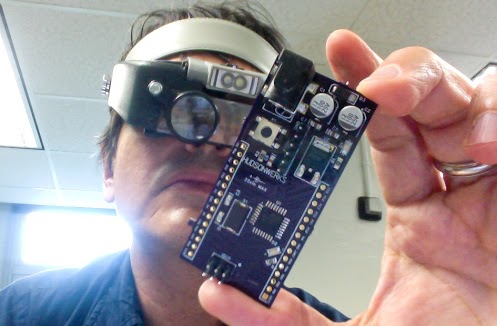 MakeIt shared photos from his SMT/PCB class that he taught at the Zahn Center recently: “Students learned how to create schematics, layout PCBs, and then hand assembled their creations (which were Duemilanove clones without the FTDI chip).” (read more) 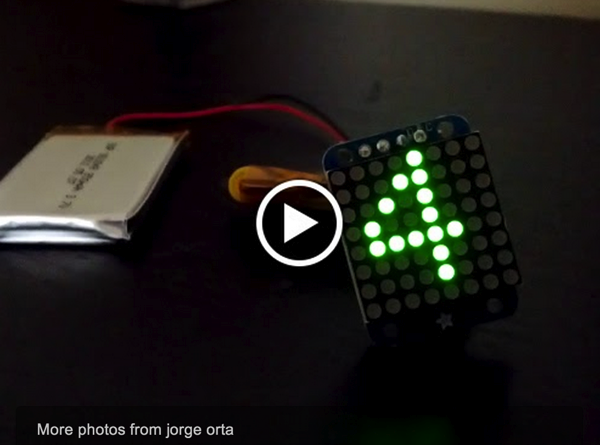 Shared by Jorge Orta: “It’s been one week with the system running on a 850mha lipo battery sleeping and waking up.” (read more)

Matthew W shared an extended video showing off his Programmable Logic Controller Trainer Panel project. “I wasn’t satisfied with that really short clip so I decided to make one with more shots of the different components. Check it out: http://youtu.be/DMxnQGmZJ6c Has anyone here built their own? (read more) 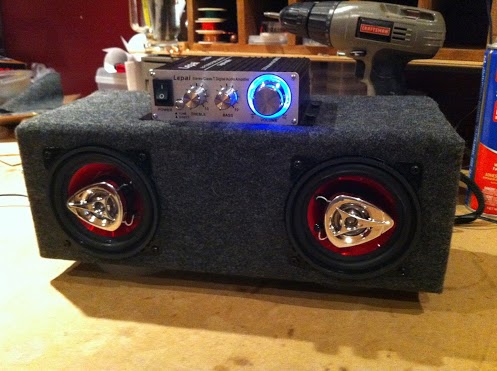 James Shyrigh shared a portable speaker system he built for his phone: “I ordered a small amplifier and 4″ speakers. Made the speaker box from the box they were shipped in. Covered it with some scrap material that I had laying around. Turned out a little better than I expected and sounds good too.” (read more) 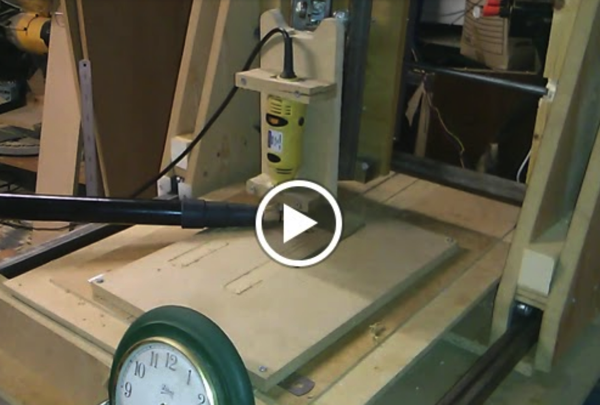 Shared by Daniel Would: “Used my nexus 4 to do this time lapse. Working to produce parts for an improved z axis carriage.” (read more) 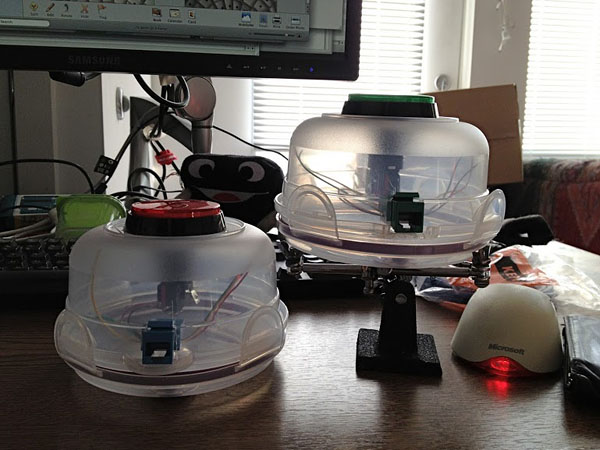 Lon Koenig shared photos of a work in progress project for comic and game conventions. “The 2 inch illuminated buttons from +Adafruit Industries are very tall “behind the panel” and require almost 2 inches. I found these Sterilite 3 cup bowls at Target. Without the lid, they still clear the switch. They even have a mold line in the base the exact size of the hole for the switch assembly.” (read more) 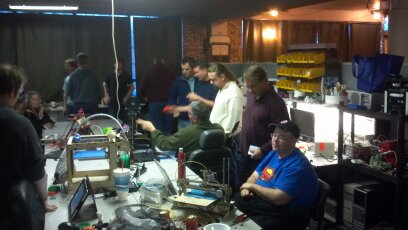 Ken Olsen shared his latest Furby hacking with Arduino progress:
“The 2005 Furby includes two motors, an upper one for the eye/ears/mouth and a lower one for the legs to rock the body back and forth. Both motors have cams with position indicator switches to help determine their home position. The upper motor also includes includes an optical rotary encoder to help determine where you are in the rotation. We need to handle these signals expediently, so need to use interrupts.” (read more) 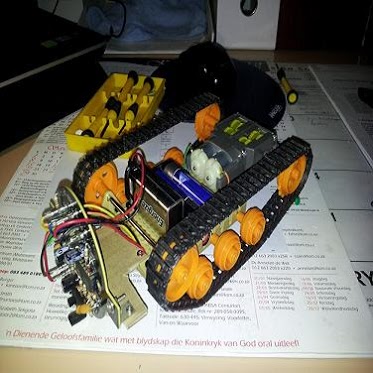 Jeremy Cook shared his “Light Graphiti” laser trace project. ”
…if you want to know how light-graffiti works in general, here’s my intro. Basically, one opens up the camera’s shutter, records all light coming in, and merges it into an image as if it happened at one time. Because of this, a servo putting little light dots on a screen can appear to be a coherent image as if it was all there at one time.” (read more) 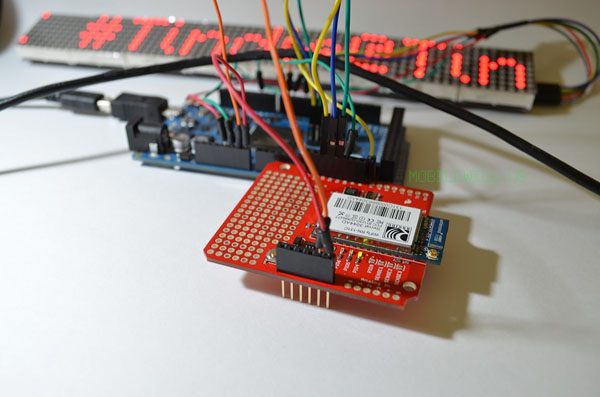 William Garrido shared another update in his twitter/scrolling text wedding preparations: experiments with a WiFly Shield and Arduino Due, and adventures sorting out a library for running it. (read more)

Thomas Edwards has finished the mechanical arm of his AWS Mechanical Turk powered chess playing Mechanical Turk. “I chose the Lynxmotion AL5D robotic arm to provide a reasonable reach at an affordable price. Moving plastic chess pieces does not require much torque, so I was able to avoid using the very capable but very expensive Dynamixel servos and instead used standard cheap RC servos.” (read more)

Willem Ellis Jr. has put together an altimeter for his quadcopter. “It uses a PIC12F675 to read a Motorola MPX4115A pressure sensor. It then transmits that data serially to an Arduino through a bit banging routine. I should cite this page as the source for the circuit. I wrote my own code in C, instead of using his.” (read more) 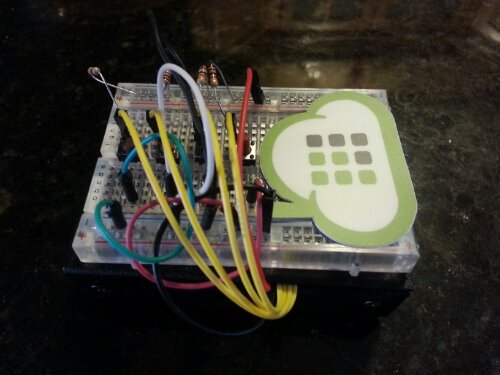 Andy Fundinger shared the project he has been putting together for an upcoming “Raspberry Python Call Mom Button” class at MakerBar in Hoboken, NJ: “I finally got time to hack together the prototype for the class project for my class this weekend. We’re going to be using the RaspberryPi to connect to Plivo and make phone calls, nominally to our Mom’s. I thought one button was boring so our call Mom Button class will actually have 4 buttons suggested as:”

Matt Heilman has been very active in the community this week, sharing the above Solar powered Insect Electrocutor project in progress as well as a few more interesting videos: how to repair a Samsung LED monitor, testing a solar panel with a number of types of light sources, and a forehead mounted light project.
(read more) 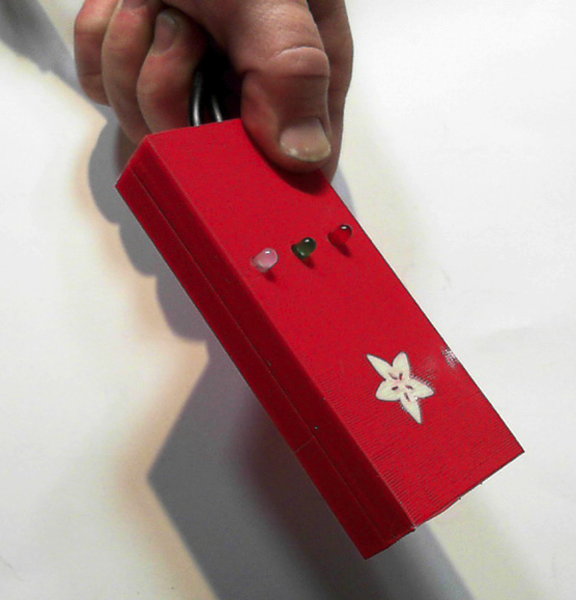 Kris Kortright shared his latest 3D printed RiderScan case. “I’ve uploaded some screenshots of the prototype RiderScan casings, fresh off the MakerBot. 🙂 I’ve modeled a case for Adafruit Industries’s RFID Breakout Board that has mounts for 3 LEDs (changing these to flat types) and uses two of Adafruit’s waterproof cable-connectors. I plan to upload a ton more screenshots this weekend of the final RiderScan case and RFID units connected and working together. :)”
(read more)

Projects from the #3DThursday Blog Series

We shared about Cymon’s tutorials about how to make the lithophanes that keep appearing on Thingiverse: “I have been having a blast figuring out lithophanes and working out how to best make them. I think I’m going to start offering custom lithophane services in the store, which technically means I shouldn’t give away how I’m making them… but that’s not the sort of guy I am.” (read more) 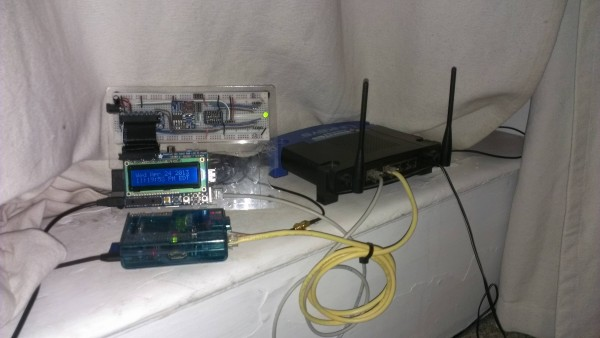 Justin Hayes shared what he believes may be: “The most ridiculously over-built clock ever?” (read more) 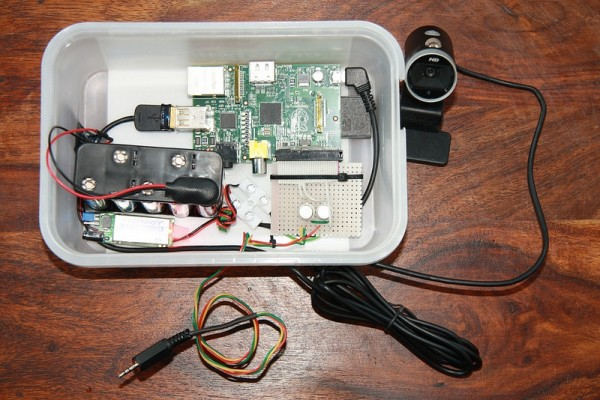 Adrian Bevan setup a RasPi project to remotely control his Canon DSLR: “Having made a DIY shutter release for my Canon1000D camera the obvious next step was to build a remote release and the device most suited to this task was of course my RaspberryPi…..” (read more)

Mark shared his balancing Pi-based robot: “When I saw my first two wheel balancing robot I was very fascinated. And after receiving my Raspberry Pi, I decided to build one myself. PiBBOT (Pi Balancing roBOT) is my first successful balancing robot. And it has room for improvement and extra functionality.” (read more) 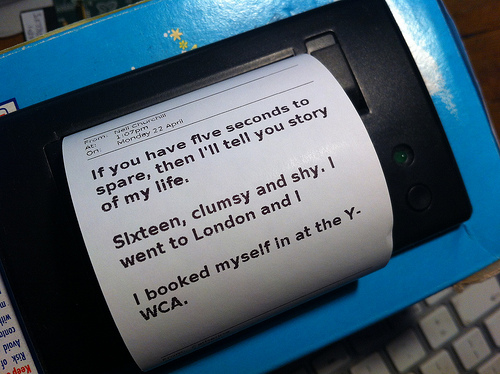 Giles Booth shared his RasPi thermal printer project: “I love the idea of the Berg Little Printer, but it’s expensive: a self-contained box that lets you rip & read internetty stuff such as weather, messages, diary events, travel news, whatever anyone can think of. I already have a thermal printer I used for my Little Box of Poems, so I decided to make an open source GoFreeRange internet printer instead. The GoFreeRange printer normally uses an Arduino, but as I have the wrong kind of Arduino, I wanted to use a Raspberry Pi instead.” (read more) 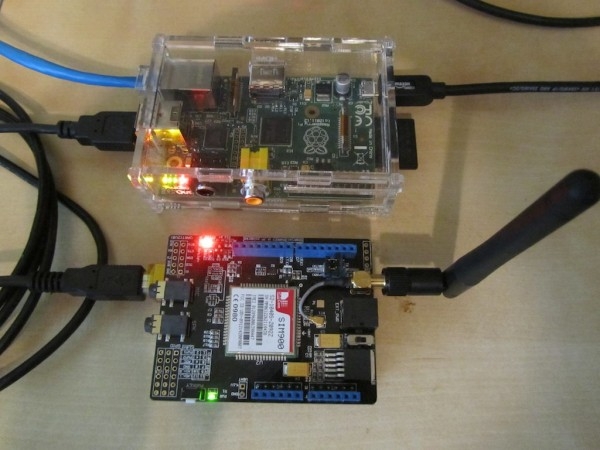 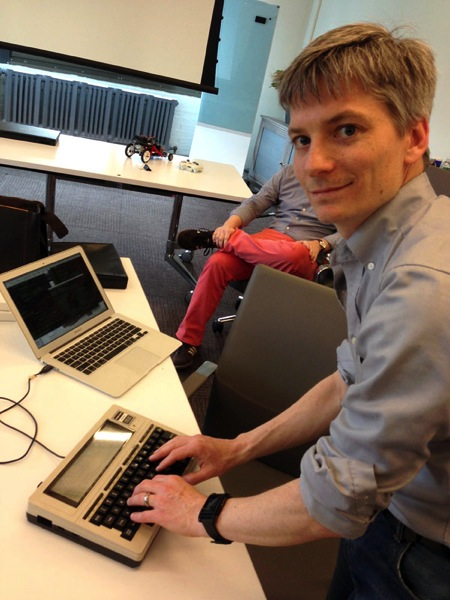 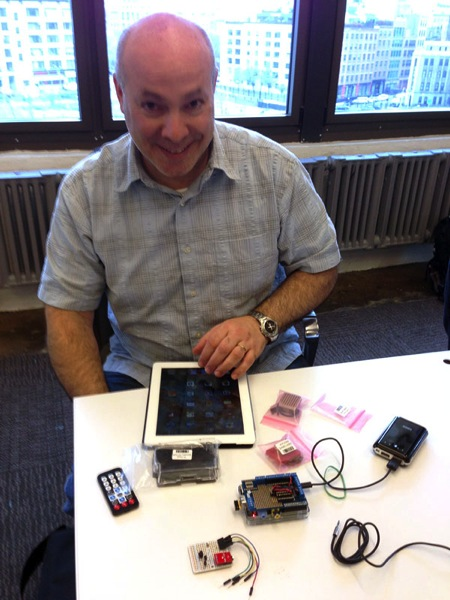 Comments Off on Community Corner: This Week in Adafruit’s Community!